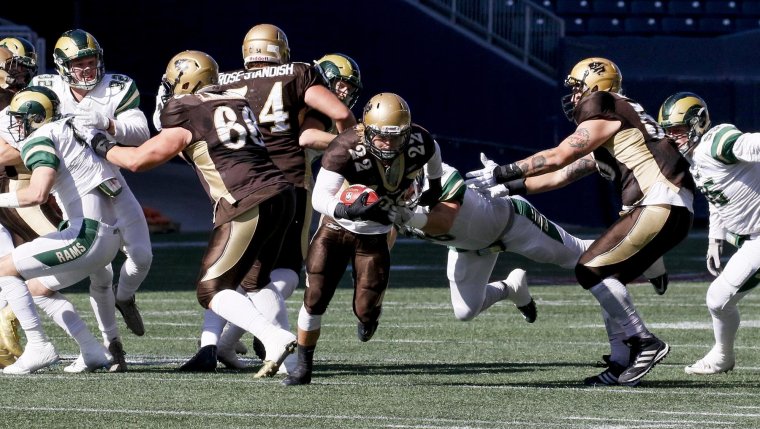 WINNIPEG — The Bison football team finished their 2018 regular season at 3-5 and head into a road semi-final matchup against no. 3 Calgary on Saturday, November 3. Before that, though, the team earned several conference selections for their effort this season.

On special teams, fifth-year Brad Mikoluff is the unanimous selection for All-Star punter, while Arruda-Welch is also an All-Star as a kick return specialist.

Arruda-Welch, 20, is also a first-time conference All-Star, as both a cornerback and a kick returner. The 6’0” cornerback had 25.5 total tackles, including 24 solo, and five pass breakups for the Herd. The Winnipeg native averaged 3.2 tackles per game.

Arruda-Welch is the first Bison to earn multiple conference All-Star selections in the same year since Jamel Lyles did so in 2015.

Weekes, 19, is also a first-time conference All-Star. The 5’11” halfback was second on the Bisons with 37 tackles and first with 35 solo tackles. The St. Adolphe, MB native also had two interceptions and two pass breakups, along with one forced fumble.

Mikoluff, 25, is a conference All-Star for the second time after earning the nod at the placekicker position in 2017. This season it’s as a punter, where he led U SPORTS in punt average with 44.4 yards. His long kick of 84 yards was also the longest in the country this year. The Beausejour native played in all eight games for Manitoba this season.

Williams, 21, is a conference All-Star for the first time. The 6’5” Williams played all over the line for Manitoba, starting all eight games this season. The fourth-year native of Winnipeg also represented the Bisons at the 2018 Valero East-West Bowl at the offensive line position.

Schrot, 24, is a conference All-Star for the first time in his fifth year. The 5’10” slotback was third in Canada West with 98.5 receiving yards per game, had 49 total receptions, and led the conference in targets without a drop. His six touchdowns were just one short of a school record.

Lyles, 22, is a conference All-Star for the third time and was Rookie of the Year in 2015. The 6’0” back from Surrey, BC led the conference in rushing yards per game with 85.1, adding a touchdown and a long run of 57 yards. He was also third in the conference in all-purpose yards with 136.9 per game.