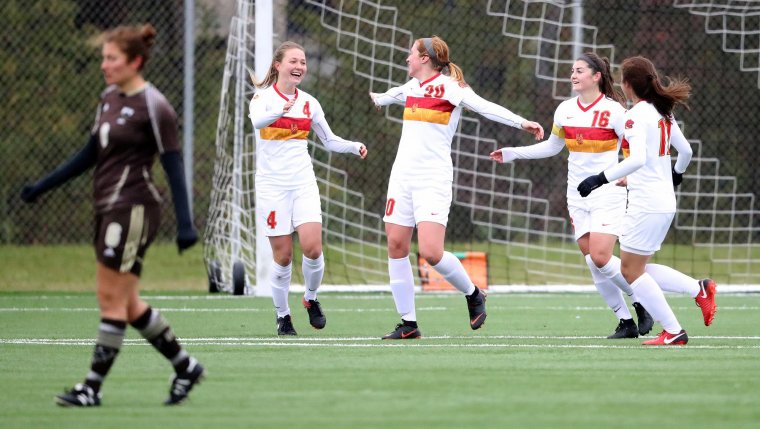 An early goal by the Calgary Dinos would end up being the game-winner, as the Manitoba Bisons took their second loss of the year in a close 1-0 game on Sunday, September 23 at the West Turf Field (U of M campus).

Bison goalkeeper Madison Wilford and Dinos goalkeeper Lauren Houghton traded crucial saves in the first five minutes of the game, in what looked to be a well-contested game between both sides. It wasn't much longer until Dinos forward Maddison Fritze put the ball in the bottom right corner of the Bisons' net to take control of the game.

Calgary came out aggressive on the offensive end, controlling the ball for most of the first half, but Wilford and the Manitoba defence managed to hold them to just one goal. Head coach of the Bisons Vanessa Martinez Lagunas said that the play of Wilford helped "bring more momentum and pressure into the second half." Wilford would finish with six saves on seven shots on goal.

The Bisons came back in the second half playing with a better planned attack that allowed them to put more offensive pressure on a solid Dinos defence. Bisons forwards Nicole Davis and Bruna Mavignier were able to create chances late in the game but, unfortunately, couldn't convert to even the score. Leading the way for Manitoba in shots was forward Hailey Lavarias.

Head coach of the Calgary Dinos Troye Flannery said that his team's success was due to a "balanced and consistent game all the way through." The Dinos will walk away from this weekend with six out of the possible six points, beating both the Winnipeg Wesmen and the Bisons.

When asked what the team needs to improve on for their next match, Martinez Lagunas said, "Definitely better finishing, we had a lot of chances at the beginning of the game that we couldn't capitalize on and it hurt us in the end." Still, she is happy leaving the weekend with three points and is excited to see how her team rebounds in their next match.

With the loss, Manitoba falls to 2-2-2 on the season, while Calgary improves to 5-1-0. Manitoba will look to bounce back against the Mount Royal Cougars next Saturday, September 29 on the road.