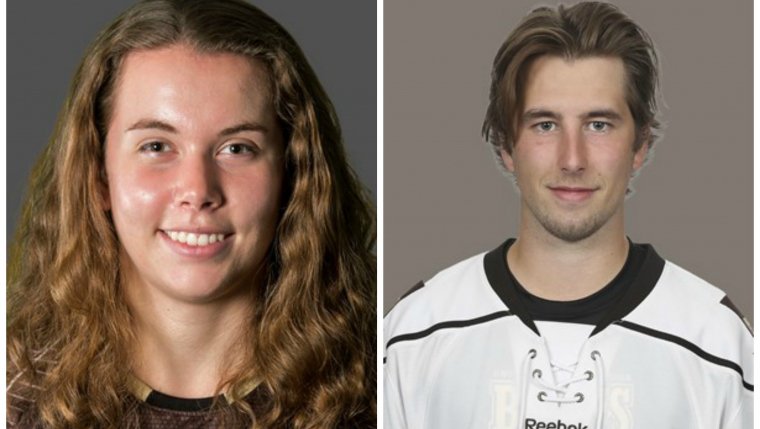 With goal-scoring performances over the weekend, Devon Skoleski from men's hockey and Alanna Shaw from women's soccer have been named the Boston Pizza Bison Sports Athletes of the Week for the week ending October 1, 2018.

Bison men's hockey got their season started in Calgary over the weekend, earning a split after a 5-2 loss Friday night and a 5-3 win on Saturday. Helping earn that split was first-year forward Devon Skoleski, who showed no signs of freshman jitters in his first weekend of Canada West action.

On Friday night, Skoleski netted the first powerplay goal of the season for the Herd, completing a nice passing play to tie the game at 2-2 late in the second period. The St. Adolphe native had two shots total in the contest.

Then, in the Bisons' win on Saturday, Skoleski scored again — putting Manitoba on the board eight minutes into the contest. It was part of a flurry of scoring for the Bisons, as Manitoba would score three unanswered on their way to the 5-3 win.

Before joining the Bisons this season, Skoleski played for the Winnipeg Blues (MJHL) and Prince Albert Raiders (WHL) in 2017-18. He played south of the border the two seasons before, suiting up for the Everett Silvertips.

Bison men's hockey now have a conference bye where they'll travel for a pair of exhibition games against North Dakota (Oct. 6) and Omaha (Oct. 7). Their home opener is Friday, October 12, 7 p.m. at Wayne Fleming Arena against the Alberta Golden Bears.

Facing two tough opponents in Alberta, Bison women's soccer battled Saturday vs. Mount Royal and Sunday vs. undefeated Alberta. While they came up without a win, third-year forward Alanna Shaw continued to prove her role as a leader on the team.

In Saturday's 2-1 loss to the Mount Royal Cougars, Shaw had the lone goal for the Herd, scoring in the 73rd minute thanks to an assist from Holly Angus. The goal is Shaw's second on the season, as she's started all eight games for Manitoba. In Sunday's loss to Alberta, Shaw had one of Manitoba's nine shots in the match. Shaw has proven to be a markswoman in her play so far in 2018-19, as she's now second on the Bisons for players who've taken over five shots with a .571 shot on goal percentage.