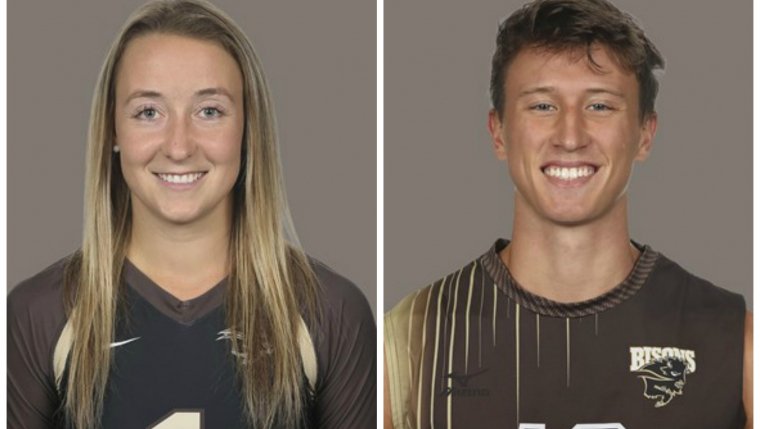 WINNIPEG - After a pair of standout performances in the final weekend of the regular season, Cassie Bujan from women's volleyball and Dustin Spiring from men's volleyball have been named the Boston Pizza Bison Sports Athletes of the Week for the week ending February 19, 2019.

Needing a strong weekend of play to get into the post-season, the Bison women’s volleyball team got a critical split against No. 5 ranked Trinity Western, with plenty of help from fifth-year libero Cassie Bujan — who set some records along the way.

In two matches, Bujan racked up a total of 47 digs. That brought her season total to 448, which sets a new Canada West record for digs in a season, previously set by Regina’s Taylor Ungar in 2017-18 (426).

In Friday’s match, the Bisons came back from down 0-2 to the Spartans to win in five sets, keeping themselves in the playoff race heading into the final match. Bujan had a match-high 25 digs, also recording a kill in the win, making multiple critical plays against the Spartans’ big hitters to keep rallies alive for the Bisons.

Bujan, a student in the Faculty of Science, finishes her regular season career with 1,332 digs — the second-most ever for a women’s volleyball player in Canada West.

The No. 8 seeded Bison women’s volleyball team will now head on the road for the Canada West Quarterfinals, as they take on the No. 1 seeded Calgary Dinos next weekend from February 22-24. Match times to be determined.

While it was a tough finish to the Bison men’s volleyball season this past weekend, the ‘Zoons didn’t go down without a signature performance from their graduating captain, fifth-year left side Dustin Spiring.

Facing the No. 2 ranked Trinity Western Spartans, Spiring was especially great in Saturday’s four-set loss, where Manitoba hung in and battled for all four sets. In the match, Spiring had a classic well-rounded performance: 18 kills (.361 percentage), three service aces, and nine digs.

In what was credited as a playoff-type atmosphere, Spiring and the Bisons rallied to win a third set 25-23 on Saturday before succumbing to a late run of Spartans points in the fourth, losing 27-25.

The night before, in a three-set loss to the Spartans, Spiring had six kills and two blocks.

Spiring, a student in the Faculty of Kinesiology & Recreation Management, finishes his fifth and final campaign second on the Bisons in kills per set (2.61), also averaging 1.25 digs and 0.53 blocks per set. He was also fourth on the team with nine service aces.

The 2018-19 Bison men’s volleyball season is now finished, as the team finishes 7-15 and outside of playoff contention.