Brendan Warren Has Been a Natural at Middle 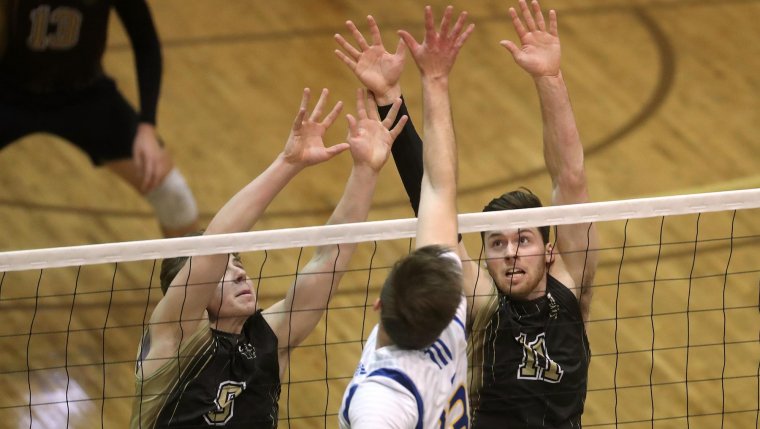 In high school, Brendan Warren was a jack of all trades athletically, involving himself in lacrosse, football, hockey and volleyball. Interestingly, it's the latter of those activities that stuck, despite the fact that the Vincent Massey graduate didn't take volleyball seriously until grade 11 with 204 Volleyball Club.

Standing at 6'6", he became a natural middle.

"My high school [volleyball] coach was an assistant for a club team and I think he had a little say in who got picked to the team. He said I could have some potential, so I got my way onto that team. That's when I first started to progress and got a little better."

The summer entering his senior year was when Warren had his true breakthrough. He was elected to the provincial team, which was led by former Bisons assistant coach Ryan Ratushniak. The pair stayed in touch afterwards, with Warren starting on Ratushniak's Canada Summer Games (CSG) team the following year. Their relationship helped the middle earn a spot on Manitoba's roster for 2017-18 – which also included provincial teammates Jack Mandryk, Owen Schwartz and Jon Laube.

"They were a great group of guys," Warren says of his three frequent teammates. "It was always fun to go to practice and work hard."

Manitoba had a void in the middle in Warren's first year, as multiple-time captain Ken Rooney was graduating, along with the other two middles. This gave the rookie the chance to slide in immediately – alongside the versatile Dusty Spiring – and progress as the season went along. He did just that, leading the conference in total blocks as a first-year with 112.

"I knew I had a chance of starting, but I also kind of knew I'd be the guy who just filled in and did what I could to help the team win. I started playing better and helping the team which gave me more confidence."

Warren hasn't missed a beat whatsoever in year two. He's leading the conference in total blocks once more with 89. He also tied a 12-year-old Canada West record last weekend, with 16 total blocks in just four sets against UBC Okanagan. But instead of boasting, Warren was quick to thank his teammates, such as Mandryk and Schwartz.

"Jack [Mandryk], as you know is a tiny dude, but he's got great timing and understands the game. Him and Owen [Schwartz], they know what they're doing. When they're setting a block on the outside, I just try and close space and put up a solid block. They just kept coming and coming, and I was just like, I'll take it."

"He's just a phenomenal athlete that learns by himself," Pischke says.

"We work on some stuff, but he learns all the time on the court from situations. It's a position that takes so much experience to read and react at this level – and we're not playing in a slouch conference either – we've got four or five guys coming at us all the time and he seems to make the right choices."