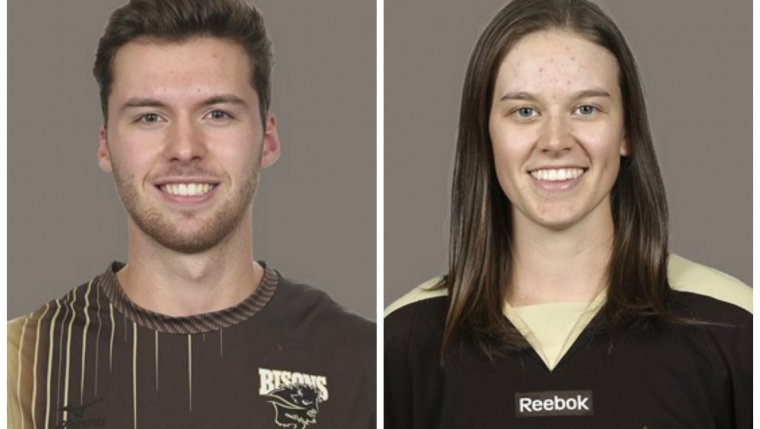 WINNIPEG – Thanks to a couple game-winning performances from the past weekend, Brendan Warren from men's volleyball and Alanna Sharman from women's hockey have been named the Boston Pizza Bison Sports Athletes of the Week for the week ending January 14, 2019.

Since starting in the conference in 2017-18, Bison men’s volleyball second-year middle Brendan Warren has been dominant on the block. Last weekend against the UBC Okanagan Heat, though, he still found a way to turn it up for a record-setting weekend.

Warren had 23 total blocks in two matches (eight sets) against the Heat, including a conference match record-tying 16 in Friday’s victory. The record ties just one other player, Saskatchewan alum Michael Wiens, who also had 16 blocks in a 2007 match at Calgary.

In Friday’s four set victory over the Heat, Warren led a fantastic performance by the Bisons defence in preventing UBC Okanagan from getting their first win of the season. Warren also blended his strong hands with a solid match in other areas, adding five kills on nine attempts and two service aces for 15.0 points.

In Saturday’s four set win, Warren added another seven blocks to his weekend total, with seven kills on 14 attempts and three service aces making up his 14.5 points.

Warren, a Winnipeg native and Vincent Massey Collegiate grad, has now extended his lead on the conference competition in blocks, with 89 total on the season — the nearest player to him has 63. He also leads in blocks per set with 1.65.

Bison men’s volleyball now head out for their first road series of the second half, taking on Saskatchewan on January 18 and 19. They return home to face the Thompson Rivers WolfPack on January 25 at 7 PM.

In an exciting race with Alberta and UBC in the Canada West standings, the Bison women’s hockey team got great news to start their second half with the return of fifth-year forward Alanna Sharman.

Sharman, a 2014-15 CW First Team All-Star, has been a great offensive threat over the years, and despite missing the first half of this season due to injury, she had no problem showing her abilities this past weekend.

Sharman scored two goals in Saturday’s 4-1 win over Mount Royal, including the game-winner, in just her fourth game of the 2018-19 campaign.

Sharman’s first goal was also the team’s first. In a 1-0 hole after the first period, Sharman put a slapshot past Cougars goalie Emma Pincott at 14:03 in the second to tie the game. She followed that up with the game-winner midway through the third, winding up for another slapshot from the faceoff circle.

Bison women’s hockey return home this weekend to take on the Regina Cougars. Game times at Wayne Fleming Arena are 7 PM on Friday, Jan. 18 and 4 PM on Saturday, Jan. 19.