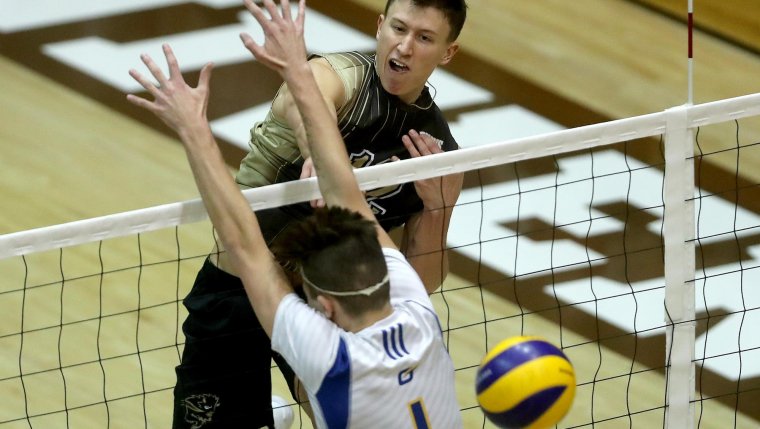 Veterans Dustin Spiring and Kevin Negus were key down the stretch, including ten kills from the latter in the fourth set and a game-high 20 overall, while the Heat’s best statistical performer was setter Denham O’Reilly with eight kills and a .190 hitting percentage.

“It could have gone either way, but Kevin came up with four or five really big kills late, and Owen [Schwartz], you can never count that guy out. He had a very impressive block at the end,” Bisons head coach Garth Pischke said postgame.

Manitoba rushed out to a 16-6 lead at the technical timeout of the first set and didn’t look back, winning 25-12.

The Heat did have an early 3-2 lead and got inspired play by O’Reilly — who had three kills — however every time the visitors would gain a point or two, their momentum would be stuffed by Manitoba’s blocking abilities, which played a huge factor on Friday.

Setter Jack Mandryk and middle Brendan Warren — the latter of whom tied a conference record with 16 total blocks yesterday — were at it again with three blocks each, while the team had 12 as a whole. The hosts also hit a stellar .429, while UBCO finished at .040.

Costly errors on both sides led to a far tighter start to the second set, with the hosts up 16-12 at the technical timeout. Both Warren and Schwartz had service aces for Manitoba, while UBCO was paced by Brisbane, Australia native Matt Aubrey, who had three early kills.

The back half of the set was just as competitive as the two sides traded momentum on multiple occasions. The Heat would get as close as one at 21-20, thanks to two kills from outside hitter Brennan Goski, but they couldn’t complete the comeback as Warren and Negus stepped up their game late with six combined kills for a 25-21 win.

Again, it was the Bisons with the superior hitting percentage, clocking in at .370 compared to .194 for the visitors.

Manitoba took a 16-13 lead into the technical timeout of the third set, however it didn’t come easy. Aubrey and Zhao both had blocks for the visitors, while outside hitter Noah Campbell tallied a kill and a service ace.

The back half of the set was just as exciting. The visitors battled back to take the lead at 21-19 and didn’t surrender their momentum, securing the 25-21 win. Middle Teo Ardanaz had a huge block down the stretch, while Goski led the attack with five total kills. UBCO also hit at .250 compared to .146 for Manitoba.

O’Reilly and Negus played out of their minds in the fourth set, combining for nine kills as the two teams went shot-for-shot. That’s when Spiring came alive though, hammering home three straight kills for his team as they took a close 16-13 lead into the technical timeout.

But the Heat were able to bounce back, taking the lead at 26-25, with outside hitter Hunter Scott playing a large role with two big kills and block.

A series of back-and-forth attacks would occur afterwards, with the teams trading set point advantage. Negus was massive from Manitoba with four kills during that time and on the other side, outside hitter Brennan Goski had two huge kills, as the match headed well into the 30’s.

The game would eventually fall Manitoba’s way, with Manitoba ending the game with a big team block.

With the win, the Bisons advanced to 6-8 while the Heat fell to 0-16. Manitoba will now head on the road to take on Saskatchewan while UBCO faces provincial rival UBC.