Bisons Face Timberwolves in Play Off Game on Oct. 26 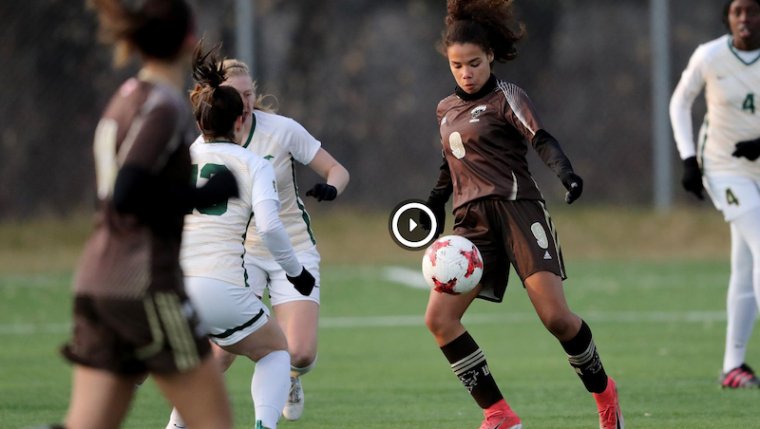 WINNIPEG – The playoffs have arrived for Bison women’s soccer, as they travel to UBC for the Canada West play in single elimination game on Friday, Oct. 26. Manitoba, who comes in 6-5-3 and the no. 3 seed in the Prairie division, will play the UNBC Timberwolves, who are 3-8-3 and the no. 6 seed in the Pacific division.

The game takes place at 8 p.m. at Thunderbird Stadium and will be streamed exclusively on CanadaWest.TV (fee required). The winner moves on to play a single elimination quarter final match against the host UBC Thunderbirds (10-3-1) on Sunday, Oct. 28.

The Bisons come in with momentum on the defensive side of the pitch, as they have earned clean sheets in five of their last six games. As the last line, goalkeeper Madison Wilford has been solid in her return to brown and gold after spending most of 2017 away from the team. Wilford is fifth in Canada West in goals against average (1.06), and has a record of 5-5-3 through 14 starts this season. The Glenlawn Collegiate graduate also has four shutouts in 2018.

On the offensive side of the ball, Manitoba’s been led by fifth-year forward Bruna Mavignier. She leads the team with five goals and an assist, with many of those coming in clutch situations — three of the goals are game-winners, two coming in one weekend in wins over UBCO and Thompson Rivers. Mavignier, who led the Bisons in scoring in the 2014 and 2015 seasons, had injury-shortened campaigns in 2016 and 2017, but has returned to form in her fifth and final year.

The Bisons last qualified for the playoffs last season, but lost a play in game 3-1 to the UBC Thunderbirds. They went on to qualify for the U SPORTS Women’s Soccer Championship as the host team, recording a 1-2 record, with a 5-1 win over the OUA champion Guelph Gryphons in the consolation semi-final.

The Bison women’s soccer team are looking for their best conference result in some time, as they last won a Canada West playoff game in 2008-09, when they beat Alberta in the conference quarter final 4-0. They have a 0-4 record since.