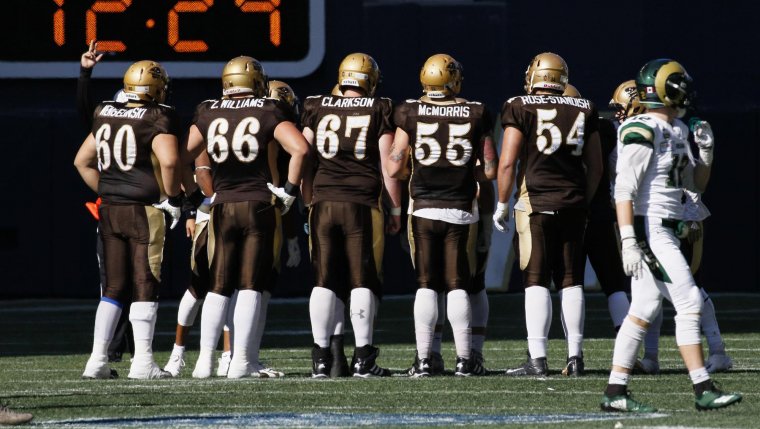 WINNIPEG – With three teams at 3-3 in Canada West with two weeks to go, it’s time to break out the calculators for playoff positioning and deciding who’s going where. Right in the thick of things are two rivals, the Bisons and Huskies, who meet in Week 7 at Griffiths Stadium in Saskatoon.

The game takes place on Saturday, October 20 at 2 p.m. CST, and will be broadcast on Bell MTS ch. 1802 in Manitoba and on CanadaWest.TV (fee required).

Catellier since then has continued to put up strong numbers. He is currently third in Canada West in yards per game (311.7) and second in touchdowns thrown (16). The Bisons have also boasted a strong running game with Jamel Lyles coming off a 147-yard outburst in Calgary to lead the conference with 109.0 yards per game on the ground.

The Huskies, meanwhile, are looking to snap a two-game losing streak. Siemens will get the start after leaving last week’s 20-10 loss to UBC, as the fifth-year went just 9-for-18, 116 yards and a pick in the first half.

Still, much of Saskatchewan’s success comes on the ground, as they’re second behind Manitoba in yards per rush (6.3) and tied for first in rushing first downs (45). Leading that attack is running back Tyler Chow, who has 475 yards on the ground this season and is fifth in the conference in yards per game (76.5).

Bisons head coach Brian Dobie also knows that the environment is a boost for the Huskies.

"They've really grown their team and are just doing it bigger and better. I think the big thing is going into Saskatchewan. That's a hard place for anybody to win and they obviously are very self-motivated because of everything that everybody puts into University of Saskatchewan football there."

And for those with your calculators out: in a tiebreaking scenario, Saskatchewan currently has two points in their head-to-head point differential with Manitoba. UBC also heads into Week 7 at 3-3, with Alberta on the playoff bubble with a record of 2-4.

"We need to win the game by three points. They know it and we know it," Dobie said. "We've got Saskatchewan and UBC and they've got us and Regina. Everybody is kind of in a position now where it's down to two games and here we go."

After this game, Manitoba will conclude their regular season at home against the UBC Thunderbirds on Saturday, October 27 at 2 p.m. CDT. Saskatchewan will play Regina at 7 p.m. CST on Friday, October 26.

A true rivalry, the Bisons and Huskies have played almost even over the last 22 seasons, as Manitoba has a 17-16 edge in regular season play and the Huskies have a 3-2 edge in playoff games.

Recent history is on Manitoba's side, as the road team has won the last three matchups between these two teams.

Big Boot: Bison kicker Brad Mikoluff is marking his place in Manitoba's record books. The Canada West Special Teams Player of the Week in Week 3 has two of the longest made field goals in Bisons history already this season: 48 yards vs. Sask (Sep. 7) and 49 yards vs. Alberta (Sep. 15). Only 6 made FGs in recorded Bison football history have been outside 49 yards.

The Real McKoy: After a pick against Regina in Week 5, free safety Jayden McKoy has 14 career interceptions with the Herd, needing just two to tie the all-time school record of 16 (Danny Jakobs, 80-83, 85).

Passing the Record Books: QB Des Catellier's 33 completions in Week 2 vs. Saskatchewan was tied for second-most ever by a Bisons QB, one short of Theo Deezar's record of 34 (2016).

Finishing Drives: Saskatchewan is tied for first in Canada West, finishing 20 of 23 red zone appearances with scores. 13 of those 23 have been for touchdowns, which is first in CW.

Like Father...: Two weeks ago, Huskies quarterback Kyle Siemens passed his father Doug in all-time passing yards and has since moved into third in school history.