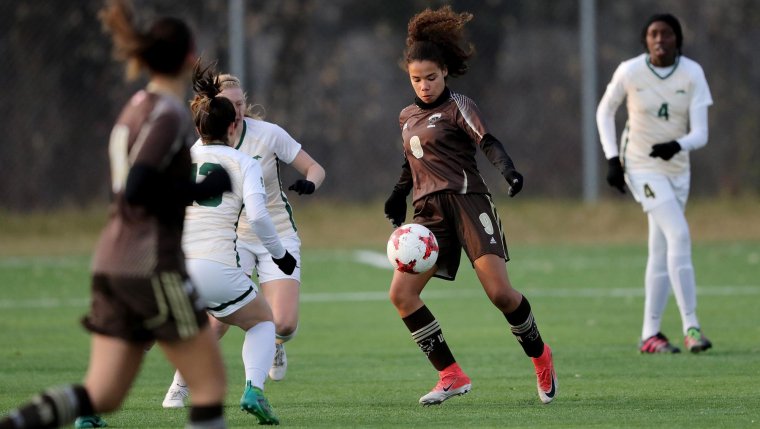 There were some outstanding opportunities late, but the Manitoba Bisons were unable to find a winning goal on Saturday, as they tied the visiting Regina Cougars 0-0 at the West Turf Field (U of M campus).

The tie gives Manitoba a single point in their last regular season game, which moves them to 6-5-3 and secures them the third seed in the Prairie Division. They’ll travel to either UBC or Trinity Western for next weekend’s play in, and potential quarter final games.

Regina, meanwhile, moves to 3-9-2 and locks down the final playoff spot in the Prairie division, eliminating Lethbridge. They’ll travel to Alberta for the first weekend of playoffs.

The match’s first opportunity came at the seven-minute mark, as Bisons forward Nicole Davis sent a header wide left of the net.

The first half opportunities dried up after that for a while, but Manitoba would get two more first half shots off — one by Hailey Lavarias in the 19th, the other by Holly Angus in the 38th — but both missed high.

In the second half, the Bisons really poured on the pressure. In the first seven minutes, they put two shots on net in quick succession, as Cougars keeper Kylie Bolton was tested by Angus and Gabrielle Clark.

Regina would get their first shot on net in the 75th minute, as Taylor Bubnick put one on that was saved by keeper Madison Wilford. The Bisons would out-shoot 13 to four overall in the contest.

Late in the match, Manitoba would again have two good chances. Off a foul just outside the penalty box, Bisons midfielder Amanda Wong put a free kick inches above the crossbar. Then, off a corner in penalty time, Mackie Burdeny had an opportunity but also missed just high.

“I’m just really proud of the girls, how they played today. We created many chances and were very close to winning it, we just couldn’t put it in,” said Bisons head coach Vanessa Martinez Lagunas. “But we’re happy for the clean sheet and, of course, it’s a good finish for our graduating athletes.”

As it was the final regular season home game for Manitoba, the graduating players were celebrated pre-game. This is the last season as a Bison for Amanda Wong, Alanna Shaw, Bruna Mavignier, and Madison Wilford.

Both the Bisons and the Cougars will play their Canada West playoff play in games on Friday, October 26, with times and opponents to be determined.