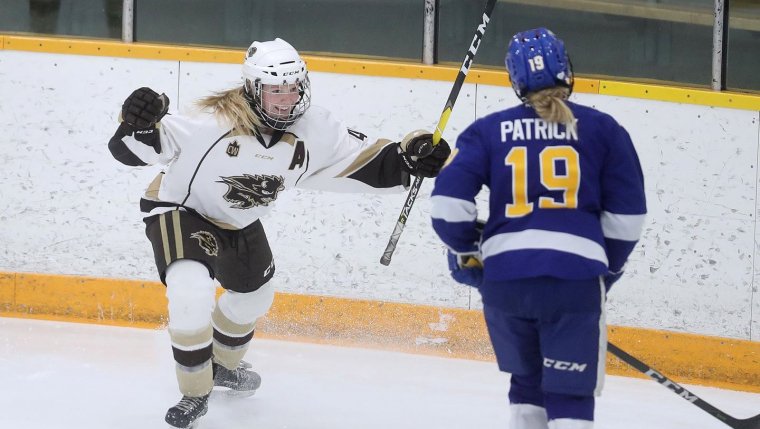 CHARLOTTETOWN – The defending national champion Bisons begin their 2019 U SPORTS Women’s Hockey Championship, hosted by UPEI, this Thursday. No. 6 seed Manitoba takes on OUA champion and No. 3 seed Guelph in the quarter-finals at 3 p.m. AST.

The single elimination game will be streamed on USPORTS.live (pay-per-view) with a home broadcast available on UMFM 101.5. The winner advances to the semi-finals on Saturday, March 16, where they’ll meet the winner between St. Thomas and McGill at a time to be determined.

The Bisons arrive as the No. 6 seed after losing to the Alberta Pandas in the best-of-three Canada West Final (3-0, 4-1). Manitoba was second to Alberta during the conference regular season as well, finishing with a record of 16-5-4-3 and 59 points.

The Guelph Gryphons arrive in Charlottetown fresh off winning their third McCaw Cup in four years. The Gryphons beat the Toronto Varsity Blues 4-2 in the OUA Championship to earn their title.

The Gryphons have been led this season by forward Kaitlin Lowy, who had two assists in the title game — adding to a regular season that saw her tied for third in the conference in scoring (25) with 13 goals and 12 assists in 22 games.

Guelph also has veteran presence between the pipes, as fifth-year Valerie Lamenta — a former U SPORTS Player of the Year — had an OUA-best save percentage of .952 in 2018-19. Her goals against average of 1.24 was also tops in Ontario.

Opposite Lamenta will be Lauren Taraschuk for Manitoba. The second-year led Canada West in wins this season with 17, posting a save percentage of 0.934 and a goals-against average of 1.54. Taraschuk has great memories of the U SPORTS stage as well, allowing just one goal in three games at last season’s national championship in London, Ontario.

The Bisons will hope to get to Lamenta early with their top forward line of fifth-years Lauryn Keen (13 goals, 13 assists), Karissa Kirkup (six goals, ten assists), and Natasha Kostenko (eight goals, seven assists). That line accounted for four of the six Manitoba goals in the conference semi-final, where they swept the UBC Thunderbirds in two games — led by Kirkup’s two goals in the game two clincher.

And while the Bisons struggled in their series against Alberta, fifth-year defender Erica Rieder played solid in pinching to earn chances for Manitoba. Rieder led Canada West in defenceman scoring and plus-minus this season, with four goals, 13 assists, and a +27.

These two teams will also be hoping to get on the man advantage sooner rather than later. The Bisons led Canada West with a success rate of 20.2% in the regular season, while Guelph was best in the OUA, converting an eye-popping 30.0% of their power play opportunities.