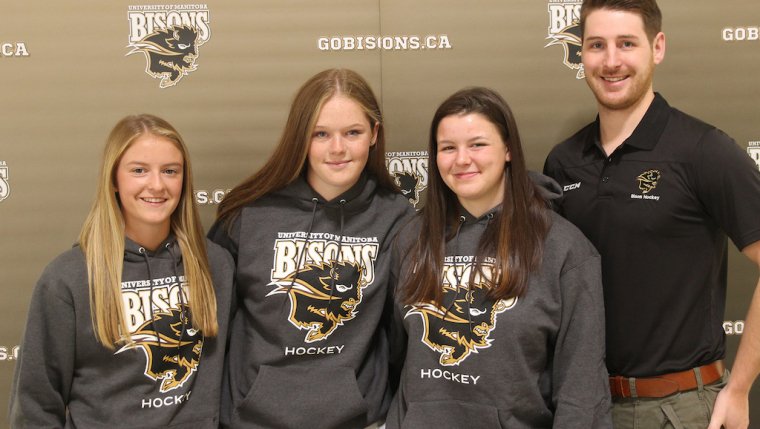 Interim head coach, Sean Fisher said, “I’m incredibly excited to welcome the 2019 recruiting class to the Bison family, I know we are adding a group of terrific young women who will complement the culture that has been built here. More impressive than their hockey accomplishments are the quality of people we are adding to our roster.”

Gregoire, 17 (pictured left), joins the Bisons from the St. Mary’s Academy Flames Prep Team. With the Flames, she won a gold medal at the 2018 Female World Sport School Challenge and was the team’s top scorer last season (49 points in 47 games). The 5’4” forward has also played at the provincial level, as a member of Team Manitoba U18. Gregoire has also played golf at the provincial level.

“Kate is a dynamic skater and is able to generate offense out of seemingly nothing,” said Fisher. “She makes players around her better and will be a driving force of Bison offensive hockey in future years.”

Edwards, 17 (pictured centre), joins the Bisons from Starbuck, Manitoba, where she plays for the Central Plains Capitals (2015-2019). The 5’8” forward has been a standout in the Manitoba Female Midget Hockey League (MFMHL) — in 2016-17, she led her team with 24 points (nine goals, 15 assists) in 43 games. Bettering that the following season, she had 45 points (20 goals, 25 assists) in 53 games. Edwards has been an Honour Roll student the last two years at Sanford Collegiate.

“Halle is a versatile forward capable of playing on both the wing or up the middle,” said Fisher. “She has a great set of hands and has the ability to shoot and score from all over the offensive zone.”

Enns, 17 (pictured right), comes to the Bisons from Linden, Manitoba, where she plays defence for the Eastman Selects (2015-19). The Selects were MFMHL champions in 2017-18, a season where the 5’5” Enns had seven goals and 14 assists on the blue line. Enns, the captain of the Selects, was also named the Most Sportsmanlike Player in the League by the MFMHL in 2017-18. In 2016-17, she led the league in goals by defencemen. She’s also been a member of U18 Team Manitoba at the provincial level.

“Camille is a slick, puck moving defensemen who makes a good first pass and can join the rush,” said Fisher. “She is also a coveted right-handed shot and is expected to contribute on the power play in future years.”

Goncharova, 18, is an international recruit from Moscow, Russia, who is currently playing with the Hockey Training Institute (HTI) Stars program in Toronto (2017-19). The 5’4” forward scored four goals and four assists in 12 games last season for the Stars in the Eastern Women’s Hockey League, averaging 0.67 points per game. Before playing in Toronto, Goncharova was a member of the Russian national U18 team in 2015-16 and played on both boys’ and girls’ teams in Moscow.

“Polina has some experience in the Russian national team,” said Fisher. “She has great puck skills and plays a very structured game.”

Sichkaruk (pronounced sich-care-uc), 16, arrives from Regina, Saskatchewan. The 5’9”, left-handed centre has been a standout player for the Regina Rebels (2016-19) in the Saskatchewan Female Midget AAA Hockey League, scoring 15 points in 28 games during the 2017-18 season. In 59 total SFMAAAHL games, she had 19 goals and 12 assists for 31 points. Sichkaruk has been on the Honour Roll the last three seasons (2015-18).

“Sam is a very skilled centre coming out of Regina. She plays a complete 200-foot game and has the ability to check and defend, and offensively can both distribute the puck and put it in the back of the net,” said Fisher.

Kunnas (pronounced coon-as), 17, arrives from Thunder Bay, Ontario. The 5’11” winger is playing for the Thunder Bay Queens in Sportop Midget AA hockey (2016-19), where she’s been the team’s leading scorer the last two seasons. In 2016-17, she had 20 goals and 23 assists, and followed that up with 31 goals and 27 assists in 2017-18. Kunnas was also a member of the U16 Ontario provincial program, and has been an Honour Roll student throughout high school at Westgate Collegiate.

“Molly is a gifted power forward who has a great touch around the net,” said Fisher. “She is a big strong kid that is difficult for teams to handle in the offensive zone and always seems to find a way to get on the stat sheet.”

Ricklefs, 17, is also a member of the Thunder Bay Queens, who will join her teammate Molly Kunnas on the Bisons. The 5’5” left-handed forward also played two years at Shaftesbury Prep High School in Winnipeg in 2015-16 and 2017-18.

“Jamie plays the game with an edge and is a prototypical Bison player,” said Fisher. “She can skate, competes incredibly hard, plays on the right side of the puck and has a sneaky release on her shot.”

Hear from the players:

Kate Gregoire: “I am excited and honoured to have the privilege to join the Bisons next year. I look forward to the new challenges of attending university and playing hockey at this level. Being asked to join this team who has won a national championship and coach of the year last year — I am so excited and committed to working hard to continue with these goals!

Halle Edwards: “I'm very excited to be a part of the Bisons team and can't wait to start my U SPORTS career in 2019.”

Camille Enns: “It was an easy choice for me to accept U of M as my university. It is the best hockey program in all of Canada, has a beautiful campus, and the physiotherapy program is top notch. The coaches have been very encouraging since our first meeting and have made me feel like I can be an asset to this team, which I am eager to try and prove. I know several of the girls on the team and I am thrilled to be able to play with them again and also get to know all the other great women on the team. I am truly blessed to be a part of the U of M Bisons family!”

Polina Goncharova: “Getting to university level of hockey has always been my dream and it’s difficult to put in words how excited I am about the news I got a week ago. I’ve heard about the successful seasons and followed Bisons games in playoffs. I was impressed by the way the team played and it inspired me to contact the coach. I’m looking forward to becoming a part of your friendly hockey family and getting such a great education that you offer.”

Samantha Sichkaruk: “I’m very excited to have been given the opportunity to play for the Manitoba Bison hockey team. I’m looking forward to improving my skills, and playing at the CIS level!”

Molly Kunnas: “I am excited to be coming to the U of M because of their strong hockey program and the many options I will have for my education.”

Jamie Ricklefs: "I'm excited to be a Bison! They have a strong hockey program with a great coaching staff. The U of M offers an opportunity for a good education along with competitive hockey and it's close to home. I'm so excited to play at the next level and it just felt like the perfect fit for me and my future."