Bison Volleyball Battles For the Post-Season at Trinity Western 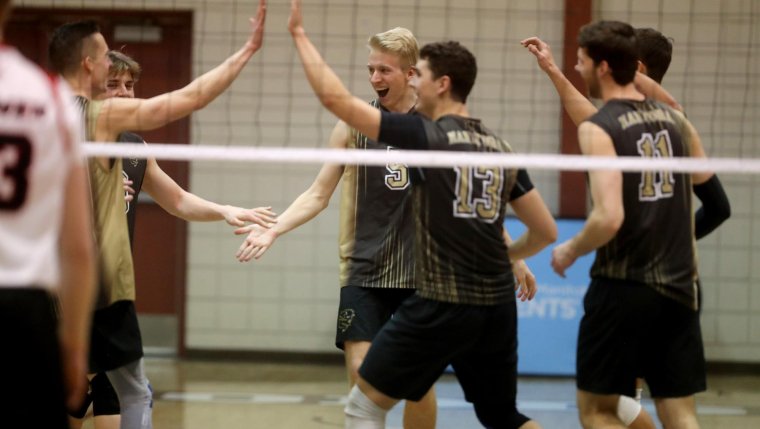 WINNIPEG – Four points back of UBC with two matches to go, the Bison men (7-13) will need some help if they're going to get into the post-season. Facing No. 2 ranked Trinity Western (16-4), they'll need to start with a pair of upsets and for Calgary to sweep the Thunderbirds (9-11). From there, tiebreaker rules come into effect.

The Spartans are led by the conference's top hitter by percentage, as third-year outside Eric Loeppky has hit .381 while averaging 3.50 kills per set this season. As a team, Trinity Western have excellent numbers: ranking third in CW in kills per set (12.32), third in assists per set (11.71), and third in blocks per set (2.66).

Manitoba will also look for a dynamic weekend on the block, as second-year middle Brendan Warren continues to lead the conference at 1.45 blocks per set. Warren has been a bit of a barometer for the Bisons' success in the second half, as he's averaged 10.7 blocks in three Manitoba wins and 3.2 blocks in five losses.

If they clinch a playoff spot this weekend, Bison men's volleyball will be on the road for the Canada West Quarterfinals, taking place between Feb. 21-24.The Manitoba Bison women’s volleyball team are on the road this weekend, concluding their regular season against the No. 5 ranked Trinity Western Spartans. Match times are set for 8 p.m. CST on Friday, February 15 and 7 p.m. CST on Saturday, February 16.

Both matches can be streamed on CanadaWest.TV (pay-per-view).

For Manitoba, that means holding off Mount Royal in a challenging weekend against the No. 5 ranked Trinity Western Spartans.

The Bisons are coming off two losses to Regina last weekend, but got a solid defensive weekend from fifth-year libero Cassie Bujan, who had 32 digs combined in the two matches. Coming into her final two conference regular season games, Bujan needs 26 digs to set a new Canada West season record — she’s currently at 401.

The Spartans will test Bujan and the Bisons’ defence with a multi-pronged attack led by third-year outside hitter Hilary Howe, who is eighth in the conference in kills per set (3.25) and seventh in points per set (4.1).

If they clinch a playoff spot this weekend, Bison women’s volleyball will be on the road for the Canada West Quarterfinals, taking place between Feb. 21-24.

Defensive fortitude: Led by the aforementioned Cassie Bujan, the back line of the Bisons’ defence has been tremendous as a whole — ranking first in the conference in both digs (1453) and digs per set (17.51).

Error struggling: One potential weak point for the Bisons this season has been their errors, as they have the fifth-most in the conference with 459.

Kearley Abbott (RS / 3rd Year): While totalling just six kills in a three-set loss to Regina on Friday, Feb. 8, Abbott has otherwise continued a torrid pace since returning to the team from injury on Jan. 4. She has double digit kills in 3 of the last 4 matches and leads the Herd in kills per set with 3.06.

Savannah Purdy (OH / 1st Year): The freshman to watch on the Spartans side, Purdy is second on the team and 14th in the conference at 2.72 kills per set. She is also eighth in CW in hitting percentage at .259.