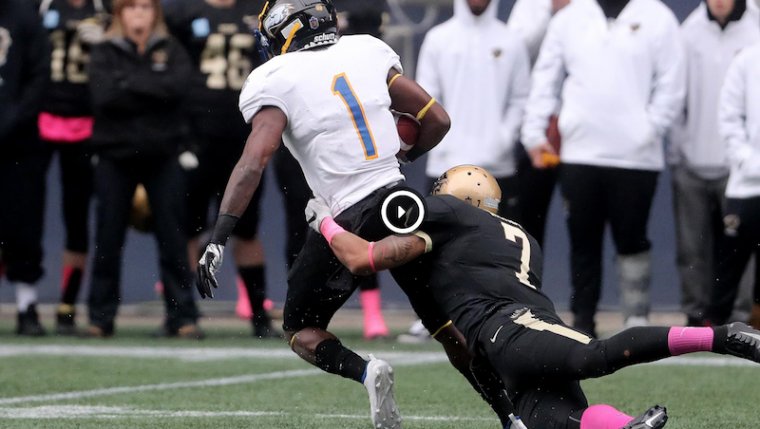 WINNIPEG – After having seven players recognized on the Canada West All-Star team, Bison football also has a spot at the table with the conference’s major award winners.

Fifth-year defensive back Jayden McKoy has been selected as the 2018 Russ Jackson award winner. Presented since 1986, the Russ Jackson is awarded to a player who exemplifies the attributes of football skill, academic achievement, and citizenship in U SPORTS.

McKoy, 23, is only the third Manitoba player to merit the prestigious Russ Jackson award. Defensive back Cam Teschuk won it in 2016, while linebacker Thomas Hall was a back-to-back recipient in 2009 and 2010.

Throughout the last five years, Jayden McKoy has been recognized by his teammates and coaches as a leader within the Bisons football program, both on and off the field.

In terms of community involvement, McKoy has spent no shortage of time volunteering for numerous initiatives around the province, including: Israel Idonije's Inner City Youth Football Camps, and the Winnipeg Blue Bombers “Crunchers” Football Camps.

He’s volunteered every season in Thompson, Manitoba — 800 kilometres north of Winnipeg — at football camps, which are part of suicide prevention programming in the community.

On campus, Jayden has been involved in several University of Manitoba Athletic Council (UMAC) initiatives. This includes the Bisons Against Bullying program, which has seen Bison athletes visit over 200 schools to speak with youth, sharing an anti-bullying message.

Other UMAC initiatives that Jayden has been part of include: Bison Book Buddies (reading to local school children) and annual visits to Siloam Mission, where McKoy volunteers and serves meals to Winnipeg’s inner city homeless.

Finally, McKoy has continued forward Sam’s Christmas, an initiative started by former Bison football player Thomas Hall. This Christmas, McKoy and others will collect donations of food and other items, which are then distributed to Winnipeg families in need.

In the classroom, McKoy is a three-time U SPORTS Academic All-Canadian in the highly demanding Faculty of Computer Engineering. He is currently taking 32 credit hours in the 2018-19 academic year.

On the field, he has amassed over 180 tackles and started every game for the Bisons in his five seasons. His 14 career interceptions are second all-time in the Manitoba record book.

“His career at Manitoba has been outstanding in all respects. He’s been the leader of our program and is certainly the most respected player in our locker room by both teammates and coaches alike. We wish him well as he represents both the University of Manitoba and Canada West at the All-Canadian Awards in Quebec City.”