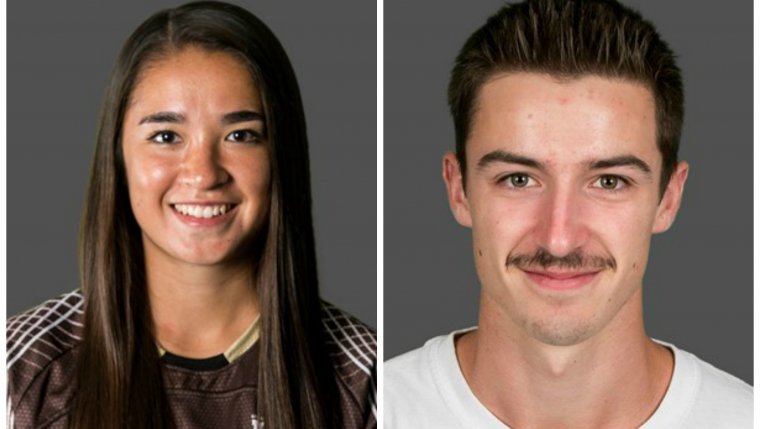 Thanks to strong performances over the weekend, two fourth-year student athletes — Amanda Wong from women's soccer and Simon Berube from men's cross country — have been named the Boston Pizza Bison Sports Athletes of the Week for the week ending September 24, 2018.

It was a cold weekend on the pitch for Bison women's soccer, but the team showed a high compete level in earning three points. Key in a 4-1 win over Lethbridge and a 1-0 loss to Calgary was fourth-year midfielder Amanda Wong.

In Saturday's win over Lethbridge, Wong opened the scoring just three minutes in, capitalizing on her second penalty kick opportunity of the season to put Manitoba ahead 1-0. Just eight minutes later, she assisted on first-year Nicole Davis' third goal of the season, giving Manitoba some insurance for the rest of the match. In the second half, she assisted on the game's last goal by Hailey Lavarias at the 71-minute mark.

In Sunday's loss to Calgary, Wong had a strong match in keeping the game close. Facing a Dinos team that had won four straight coming in, Manitoba was able to tilt the pitch in the game's second half with Wong at midfield, but were unable to manage an equalizer.

Through six games, Wong is now tied for Manitoba's points lead with four (tied for 7th in Canada West). She has nine shots and a shot on goal percentage of .778.

Bison women's soccer now head on the road next weekend, as they'll play the Mount Royal Cougars on September 29 at 12 p.m. and the Alberta Pandas on September 30 at 1 p.m.

In the team's first cross-border event of the season, fourth-year cross country and track and field athlete Simon Berube showed no signs of road-weariness.

Competing at the St. Olaf Invitational on September 22 in Northfield, Minnesota, Berube won the 8 km event — posting a time of 26:20.5. The win was a second ahead of the event's second-place finisher, as Berube averaged 3:18 per kilometer during the race. Berube was ranked seventh heading into the event.

Berube is in his fourth year running track and cross country with the Bisons. Last season, he was a member of the U SPORTS-qualifying 4 x 400 m and 4x 800 m relay teams. This summer at the Canadian Track & Field Championships, Berube and the senior 4 x 400 m Stride Ahead Tough Track Club team achieved a silver medal.

The next event on the Bison Cross Country schedule is the University of Saskatchewan Open on Saturday, September 29 at 12 p.m.