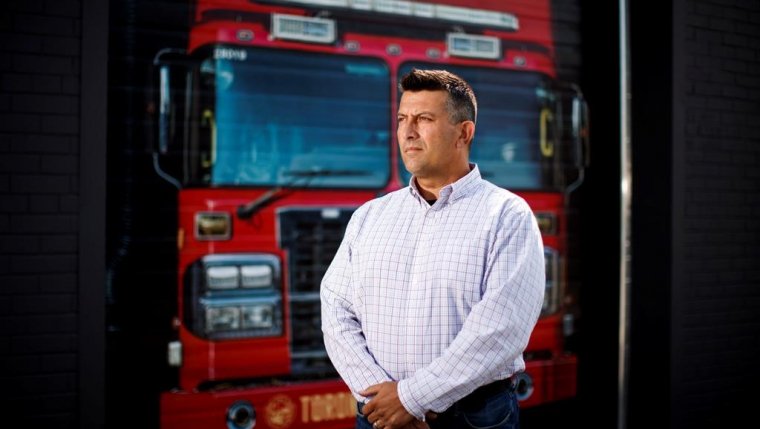 His annual ski trip to Lake Placid, N.Y., with colleagues from Toronto Fire Services was drawing to a close when he realized he’d forgotten to bring a camera to the lodge where he was unwinding with friends about half−way up Whiteface Mountain.

He told friends he’d ski down to a car to retrieve his cellphone and return to document the end of their sojourn on the slopes. That quest led to a baffling journey the 50−year−old fire captain will likely never be able to fully remember.

Filippidis vanished on Feb. 7, triggering a massive ground search that involved state authorities, family and friends. When he surfaced six days later in Sacramento Calif., some 4,000 kilometres away, the veteran firefighter says he was just as mystified about his cross−country trek as everyone else.

"It’s still overwhelmingly shocking that it happened," Filippidis told The Canadian Press in his first interview since disappearing on the slopes.

Doctors and police have since been able to fill in some of the blanks, determining that Filippidis’ unusual ordeal came about as a result of a head injury sustained on that fateful trek to retrieve his cellphone.

Now, as he returns to work, he says he often dwells on what could have happened.

"I feel fortunate that I’m here talking today because of all the potential things that could have resulted," he says.

Filippidis says he believes his misadventure began when he took a wrong turn on the way back to the car. He has no recollection of a fall that knocked him out and likely caused a concussion, but recalls coming to at "dusk" feeling sore and disoriented.

He made his way to what he mistakenly believed to be the main ski lodge, only to find it closed and deserted. Investigators later determined that Filippidis likely fell near a children’s ski slope and worked his way to the hub of kids programming, an area that’s sparsely populated and would have been closed at the time.

Filippidis suspects he then flagged down a truck in the hopes of securing a ride off the mountain.

Memories of what happened next are fragmented at best.

He recalls climbing into the warm cab of a truck still clad in his ski boots and winter clothing. He remembers being sick by the side of a road at what appeared to be a truck stop, and then learning he was driving through Utah.

"I’d never been out that way," he says. "It kind of added to my confusion and feeling of not really knowing what was going on because I’m not familiar with that part of the country."

He has a clear impression of the crushing headache and intense fatigue that left him unable to do little besides sleep as he unwittingly wound his way further away from Lake Placid.

Back at the ski resort, his companions quickly determined that Filippidis had never retrieved his cellphone and realized something was amiss.

Meanwhile, Filippidis’ faint hope that he was experiencing "a bad dream" gave way to grim reality when, after a few days on the road, the trucker informed him that they had reached the "end of the line" in Sacramento. Filippidis says he doesn’t know who the trucker was and authorities haven’t been able to track the man down.

Filippidis says he found himself wandering the city intent on contacting his wife but unsure of how to do so.

Armed with the credit card he’d pocketed back in Lake Placid to pay for his lift pass and some cash, Filippidis says he managed to buy an iPhone, adding several stores were reluctant to sell to someone without identification.

Then, however, he says he couldn’t immediately remember his wife’s number.

"I ended up on the internet ... I think that’s when I came to the realization that I was a missing person," he says.

The next day, Filippidis flagged a ride to the Sacramento airport, where he was finally able to recall his wife’s number. His frantic family then urged him to call 911, which ultimately landed him in hospital for evaluation.

It was there that doctors introduced the theory that his misadventures had been caused by a head injury. Visits to neurologists and neuropsychologists in Toronto, as well as three sets of tests, have since confirmed that diagnosis, Filippidis says.

The theory rings true for Dr. Charles Tator, director of the Canadian Concussion Centre at the Toronto Western Hospital.

Amnesia can take place in about a quarter of concussion cases, he says, adding headaches, fatigue, nausea and "islands of memory" are all classic symptoms.

"Most people make a complete recovery, although the amnesia will likely last forever," Tator says. "He will probably forever have those blanks."

Filippidis, for his part, is now focused on turning the page.

Bolstered by the reassurance that the head injury won’t have lasting effects, he says he’s revelling in being back at work among those who rallied around him and his loved ones.

As for his family, he says the ordeal brought them closer than ever.

"There was a lot of despair and a lot of stress on them in the sense that it just didn’t look reasonable that I would be found OK," he says. "But ... we can almost talk about anything now."