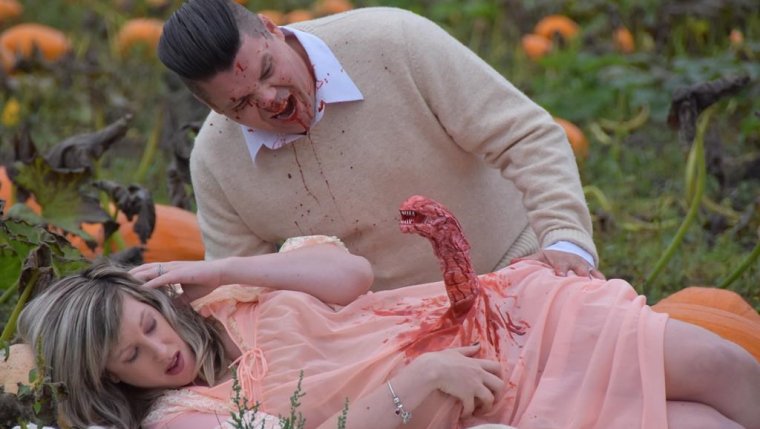 VANCOUVER — In Ridley Scott’s 1979 classic, "Alien," the crew of the Nostromo begin a voyage unknowingly carrying a new being along with them.

Thirty−nine years later, Todd and Nicole Cameron of Nanaimo, B.C., drew inspiration from the film to tell their friends and family that they too will embark on a voyage with a new being.

On the rainy afternoon of Sept. 20, Nicole Cameron donned a dreamy, peach−coloured chiffon dress that showed off her eight−and−a−half−month baby belly, while her husband wore an off−white sweater to pose in a pumpkin patch for their photographer, Li Carter.

A few photos in, Nicole Cameron’s expression changed to one of pain. She lay in the pumpkin patch, splattered in mud, as a life form tore through her stomach.

It was the creature from "Alien."

"Over the summer Nicole had been talking about this baby inside her and how it was so weird to see it moving and she could feel its elbows and feet, hands moving all around her," Todd Cameron said.

"It felt like an alien entity inside of her and I kind of put two and two together."

While cruising around his neighbourhood this August, Todd Cameron, 44, spotted a garage sale with various knick−knacks from movies. As he sieved through the treasures, he spotted a silicone model of the chest−bursting alien. He paid a handsome $15 for it.

Todd Cameron recalled the first time he watched the movie. He was about 12 years old, and it was his first horror flick, watched late at night after his parents went to bed.

He said he remembers the scene of the birthing beast vividly.

"It just seemed so realistic and so unexpected because they were all sitting around having a meal," he said.

"There seemed to be no danger in the room. For it to come from within, no one was expecting. And I just remember thinking it was a super, super cool."

While gluing and putting together his newly acquired alien treasure, he asked his wife whether she’d be interested in a comedy−horror maternity photo shoot, seeing as she wasn’t interested in a traditional one.

She was into it.

Gory costumes are hardly new for the couple, who met on Halloween five years ago at Nanaimo’s Oxy Pub, where Todd Cameron worked as a karaoke host. His future wife came in limping, dressed as a zombie with blood oozing out of her neck and face.

"She was in character so she wasn’t talking and I was just blown away," he said.

On Oct. 21, 2015, the day Doc and Marty arrive in the future in "Back To The Future Part II," Todd Cameron took his then−girlfriend to the Universal Studios in California, where he got a private tour of the cars that were in the movie.

There, in front of Biff’s car, Todd Cameron recreated a scene from the movie and pulled the ring from a box shaped like the DeLorean.

And for their pregnancy announcement, the couple travelled to Calgary’s comic festival where they had a picture taken with actors Christopher Lloyd, Tom Wilson and Leah Thompson, who held up little signs that read "Baby Time" and "Great Scott," and also had baby booties.

As they continue their voyage, Nicole Cameron was only too happy to have an out−of−this world maternity photo shoot recreating the classic Alien birth scene.

One of the pictures shows Cameron running after the creature as it skitters through the pumpkin patch.

"This wasn’t really intended but looking back on the shoot now I feel like that the underlying message, other than the comedy and the horror was that, love your kids for who they are. However they come out, whoever they happen to be just love them and support them even if they are hideous, alien creatures, give them a hug," he said.

Nicole Cameron is due in three days and the couple hope the new addition to the family loves Halloween as much as they do.

They don’t know whether their baby is a boy or a girl.