U of A Pandas Women's Hockey Team Bus Clipped by Semi 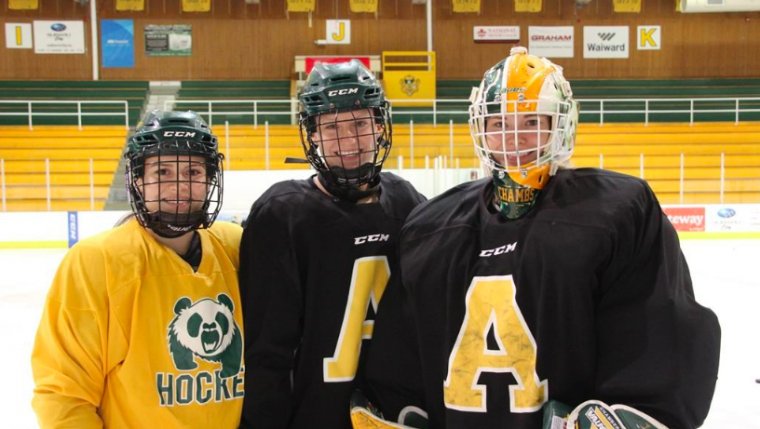 EDMONTON — For the first couple of minutes after the crash, no one on the University of Alberta Pandas hockey team bus knew what had happened.

Abby Benning, who plays defence, heard a pop, then glass breaking and what sounded like marbles hitting the floor.

Goalie Kirsten Chamberlin, who had music blasting through her earphones, said everything looked white.

"It was pretty scary. It was pretty crazy to think it happened, that we got into an accident," said Dillon, who also plays defence.

The women were returning to Edmonton from a game in Calgary about 1:30 a.m. on Nov. 24 when their chartered bus clipped a semi that was pulled over on the highway.

"The first thing you think about is Humboldt," recalled Chamberlin, 20.

Sixteen people — including 10 players and the head coach — were killed and 13 players were injured in April when a semi and a bus carrying the Humboldt Broncos of the Saskatchewan Junior Hockey League collided at a rural crossroads.

Dillon, 21, went to high school with one of the injured players, Derek Patter, who’s back with the Broncos this season.

Benning knew two of the players who died — Jaxon Joseph and Stephen Wack — through school and hockey in the Edmonton area.

"What are the odds?" Benning said. "When I clued into what was actually happening, I thought this is what the boys heard when they were on the bus. This is how they felt.

"I’m not trying to be over−dramatic but it felt like we were going to die because nobody knew what was happening."

Coach Howie Draper and some of the players had cuts on their faces. Two teammates were taken to hospital with minor injuries, including glass in their eyes.

Everyone is back on the ice now and some players are adding their voices to a call from some Broncos parents for mandatory seatbelts on team buses.

"It’s a pretty easy thing to do that can save your life," said Chamberlin.

There have been no changes by Hockey Canada, the national governing body for the sport. But some leagues, including the Saskatchewan junior league, have made seatbelt use a priority.

Several teams have already made it a habit to wear seatbelts on buses and tweet under the #buckleupforthebroncos hashtag.

The movement grew after Tricia Wack, whose son Stephen died in the Broncos crash, wrote an opinion piece that ran in newspapers across the country.

Former NHLer Chris Joseph, who lost his son Jaxon, has also said he’d like to see regular seatbelt use on buses.

The issue was also raised after a fatal bus crash involving the Swift Current Broncos of the Western Hockey League in 1986.

Four players were killed when the bus hit a patch of black ice, struck an approach and landed on its side. Many of the 24 others on the bus were injured.

A coroner’s inquest report, which was obtained through a freedom−of−information request, said three of the four died from spinal injuries they received when they were thrown upwards into the roof of the bus. The fourth died when he was crushed by the bus.

The coroner recommended that legislation be enacted that would require team buses to be equipped with seatbelts and would ensure they were used.

But there was no followup and there have been no changes at the provincial level since the Humboldt crash. The federal government announced in June that all newly built highway buses will be required to have seatbelts by September 2020.

Some charter bus companies point out that many new buses already have seatbelts, but there is no way to ensure everyone is wearing them.

On the night of the Pandas crash, most team members were wearing seatbelts when the bus left Calgary because the roads were icy, Benning said.

"We’ve made the Calgary road trip so many times," she said. "Everyone was trying to get some sleep ... so some of the girls for sure took seatbelts off trying to get cosy."

She and the others expect they will make it a habit and try to get the word out to other players.

"You don’t think it’s going to happen to your team or your friends or your family, but that’s not how the world works," Chamberlin said.