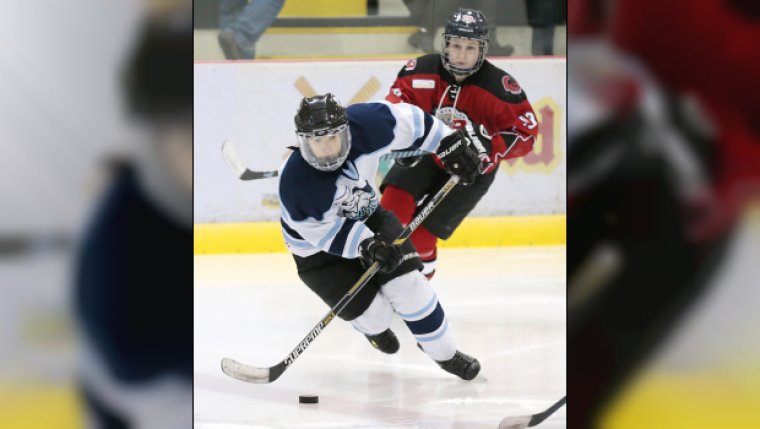 WINNIPEG - To no one’s surprise, Alicia Prociuk of league champion Polar Ice was named the winner of the Manitoba Women’s Junior Hockey League rookie of the year award.

Prociuk, is the 18-year-old leading scorer on Polar Ice, the first place team in the league and eventual playoff champions.

Thanks to players like Prociuk, Polar Ice finished the MWJHL’s season with a record of 18-6-0, eight points ahead of the second-place Western Predators. She joined Polar Ice right out of high school hockey last fall, finished the season with 10 goals and 25 points in 24 games and was the fourth leading scorer in the league, just behind veteran stars Hope Anderson of the Silvertips, league MVP Renee Stevenson of the Northern Stars and Forward of the Year Whitney Scott of Prairie Blaze.

For the first-year University of Winnipeg student, the 2017-18 season has been a pleasant surprise.

“Yeah, it’s been a really good year,” said Prociuk. “With so many high-level players in our league, I didn’t think I’d be this successful.

“But our team played really well. That’s a big part of it. I think it’s because of our hard work and effort. The effort really paid off. Even if we’re having a bad game, I just make sure I keep working hard and give my all. I think we’re like that as a team.”

Prociuk has a very interesting hockey story. Shy as a youngster, she used hockey to meet new friends. It helped her gain confidence and become more involved with her community.

“I guess I got to playing hockey a little late,” she conceded. “I started playing at the age of eight at Heritage Community Centre. I was the only girl on my team back then. Still, I found it pretty easy. I didn’t know a lot of kids when I started, but hockey was really good for me. I was a shy kid and didn’t make many friends until I played hockey and I started to get to know my teammates. Hockey got me going on the way toward making more friends. It was really good for me. When I was younger, I didn’t meet a lot of people, but hockey helped me and got me more involved with my community.”

Despite her late start, she worked extra hard to become a proficient player.

“When I started, I was in the lower levels like house league, but I loved the game and I worked hard to make to the higher levels,” she explained. “I went to hockey camps and took skating lessons and I played on the outdoor rinks as often as I could.

“I got started in the game just by watching the NHL and women’s Olympic teams on TV. Hockey was always around me. My cousins played and while my parents didn’t play hockey, my mom played ringette. When I first started, my mom asked me, ‘Ringette or hockey?’ and I just wanted to be like all the hockey stars I watched on TV.

“I started playing boys hockey and then got involved with girls’ hockey. I played 11 A-1 with the Luxton Falcons and then the Woodhaven Bruins. I played A-1 and then Double A with the Titans in Bantam and in Grade 9, I tried out for Triple A and made the team, but decided to play high school hockey at Westwood Collegiate.”

In high school hockey, she was a star. That’s when he game blossomed and she became good enough to eventually make her mark at the junior level. Oh, and in a prophetic sense, she also won herself a rookie of the year award

“I played high school from Grade 9 through Grade 12,” she said. “In Grade 9, I played both high school and Double A and still got rookie of the year in the high school league. In Grade 9 we won the B Division Championship. Then in Grade 10, we moved up into the A Division and didn’t win any more championships, but I was team captain in Grade 11 and 12.”

This fall, she took a shot at playing junior and not only made Polar Ice, she turned out to be one of the best players in the league.

“I didn’t know anyone personally when I started although I’d played against some of them in high school,” she said. “It was just like starting over.”

For Polar Ice co-head coach Coach Jamie Bound, Alicia has been a breath of fresh air.

“Alicia is everything you want in a hockey player,” said Bound. “She’s an absolute pleasure to coach and brings a great attitude and work ethic to the rink every game and practice. Her offensive ability clearly shows up on the stat sheets, but what doesn’t show is she puts up good offensive numbers while being defensively responsible in all three zones of the ice. She is very hockey smart.

“Alicia always has a smile on her face and gets along great with all of her teammates. She’s an absolute team player.”

For her part, Prociuk sticks to her personal commitment to be at her best on every shift.

“I’m always trying my hardest,” she said. “I give it my all in every game. I just want to make sure that I do everything I can to help my teammates.

“And I love our coaches. They are always helping us improve. We work very hard on our fundamentals and the coaches will do everything they can to make us better. They’re just so encouraging and they always look out for the team. It’s been a good year. I’m a little surprised, but I figure that as long as I work my hardest every game, even if I’m not having my best game, we’ll be OK.”