The Pride of Dauphin Finally Gets His Ring 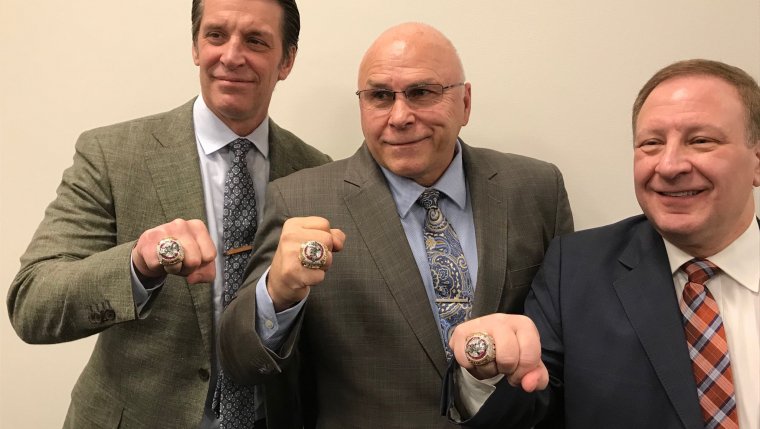 The Washington Capitals are the reigning Stanley Cup Champions, and they will be until at least mid-June of this calendar year. For a team awaiting its first cup in 46 years of existence, the reward couldn’t be any sweeter, or the storylines any neater.

NHL veteran Alexander Ovechkin became the first Russian captain ever to win a sip from Lord Stanley’s mug. It was also the first Stanley Cup victory by a Dane (Lars Eller) an Australian (Nathan Walker) and a German netminder (Philipp Grubauer). Saskatchewan-born rookie forward Chandler Stephenson also brought the Cup to Humboldt as a part of his allotted 24-hours with hockey’s greatest prize.

However, for Manitobans, the big story out of Washington was that of the Capitals’ former Head Coach Barry Trotz. After collecting his first Stanley Cup win, the Dauphin, MB. product signed on to coach the New York Islanders on a five-year, $20 million deal. In leaving the Capitals, Trotz became just the first coach since ‘Iron’ Mike Keenan (1994) to sign with a new team for the season immediately following a Cup victory.

Trotz’s Islanders hosted the Capitals prior to Christmas, reuniting the former Caps’ bench boss with the team that he guided to the Cup. Washington welcomed the now 56-year-old into the visitors’ dressing room, before presenting him with his much deserved official Stanley Cup Champions ring in a brief ceremony honouring his accomplishments.

Trotz played out his junior career with the MJHL’s Dauphin Kings as well as the WHL’s Regina Pats and Brandon Wheat Kings. Upon completing junior, Trotz transitioned over to coaching, and accepted the call as bench boss of the University of Manitoba Bisons.

After graduating to the American Hockey League, Trotz was hand-selected by General Manager David Poile to become the first Head Coach in Nashville Predators history. Trotz played a key role for the Preds in the 1998 expansion draft, staying with the team through the highs and lows of 15 NHL seasons.

It didn’t take much time for Trotz to find work after his long-lasting legacy behind the bench in Nashville came to a close in 2014. Washington scooped up the then 557-game winner, and the big man from Dauphin helped coach Ovechkin and Co. to a 205-89-34 record through four seasons at the helm.

Trotz saw exceptional levels of success with the Capitals, twice leading Washington to the Presidents’ Trophy (2015-16, 2016-17), while collecting the NHL’s Jack Adams Award as coach of the year following the 2015-16 season. However, quality coaching and on-ice success do not always go hand-in-hand, as both Trotz and Ovechkin were never quite able to find their way out of the second round of the postseason. That is, until 2018.

“I’ve been chasing this for a long time,” Trotz said following his Cup victory. “You need a great group, and you need to be playing well. I knew we were going to go deep and get to the final; I knew we were going to kill some demons. I’m just so happy for Alex (Ovechkin) and that group… Getting to lift the Cup with him was so special.”

“We were down in every series and came back in every one,” Trotz added. “I’m going to enjoy this because it’s taken a long time to get here. And it’s not only that, it’s the fact that your legacy is going to go on that Cup. My kids’ kids can go to the Hockey Hall of Fame and say, “There’s grandpa’s name on the Cup.” That, to me, means everything.”