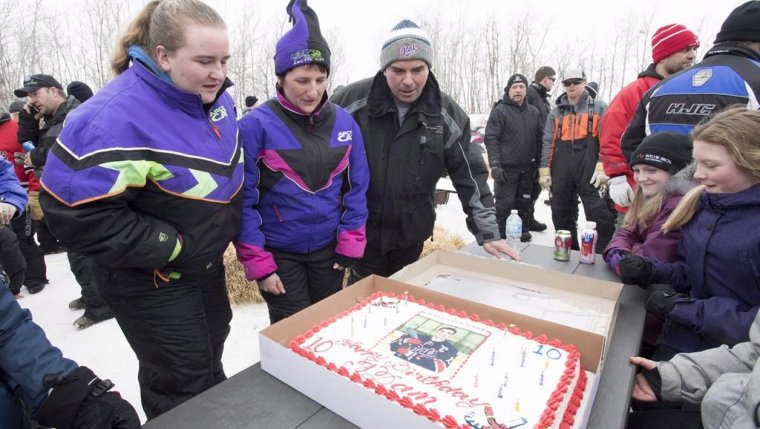 REGINA — The family of one of the Humboldt Broncos players killed in a highway crash has filed a lawsuit alleging a semi−truck driver with inadequate training failed to stop at a flashing stop sign at a rural intersection hidden by trees before colliding with the junior hockey team’s bus.

The suit further alleges the roof of the Broncos bus was not designed to withstand the crash and that it should have been equipped with seatbelts.

It asks for an unspecified amount of damages as well as court orders, one which declares that all buses carrying sports teams in Saskatchewan be equipped with seatbelts and other safety devices.

The Broncos were on their way to a playoff game when the crash happened north of Tisdale, Sask. on April 6. Sixteen people on the bus were killed and 13 others were injured.

Russell and Raelene Herold of Montmartre, Sask., filed the statement of claim Monday in Regina court on behalf of their 16−year−old son, Adam Herold, the youngest player on the team and one of its rising stars.

"Adam would have played in the National Hockey League," says the suit. "Adam had the potential to earn approximately $20−$30 million over the course of his NHL hockey career."

The suit also says he would have taken over the family’s farm.

Allegations contained in the lawsuit have not been proven and no statements of defence have yet been filed in court. Russell Herold declined to comment on lawsuit when reached by The Canadian Press.

The document names the truck driver, Jaskirat Singh Sidhu of Calgary, as well as the Calgary−based trucking company that employed him, Adesh Deol Trucking Ltd. The bus manufacturer is listed as a defendant but could not be identified.

Sidhu "was not and he knew he was not sufficiently skilled or trained to operate the semi," says the suit. "The results of his conduct were catastrophic."

The document alleges Sidhu had two weeks of training and had been driving the truck for two weeks with Adesh Deol before the crash. He had been hauling a load of peat moss the day of the crash, and the suit says he had never driven the route in eastern Saskatchewan before.

The truck was heading west on Highway 335 and would have come across a flashing stop sign as it approached Highway 35, known as Armley Corner. The suit says a stand of evergreen tress and dense brush at the intersection would have prevented the bus, northbound on 35, from seeing the truck before it was too late.

Sidhu "intentionally, recklessly and/or negligently drove the semi through the Armley Corner intersection without adhering to the warning lights and signs and did not stop," says the suit.

The roof of the bus came off during the collision and everyone inside was tossed around. Sidhu was not injured.

"The bus posed a serious risk of injury and death to the passengers because of the defect in the roof design or manufacture of the roof," says the document.

"It had no shoulder harness seatbelts to keep its passengers inside the bus in the event of an accident and that it had no other early warning safety features to warn the driver of the bus of a potential accident."

In addition to requiring buses to have seatbelts, the suit is also asking for court orders declaring the intersection unsafe and for semi drivers to pass strict safety tests before they can haul Super B trailers in Saskatchewan — the same type Sidhu was carrying.

Both Saskatchewan and Alberta governments have said they are working on ways to improve truck safety that include more driver training.