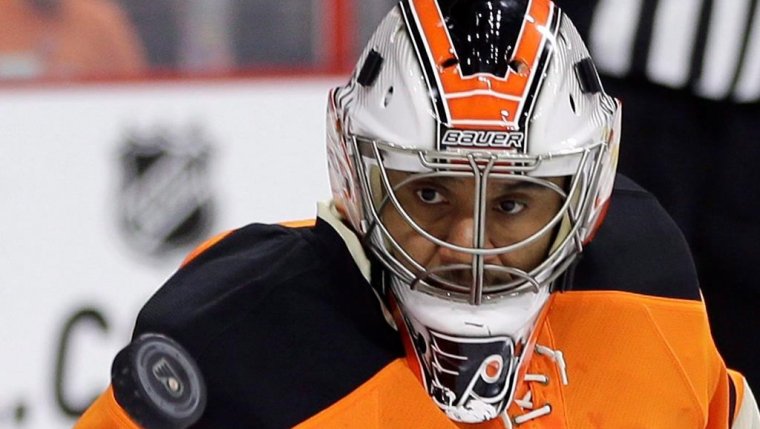 HAMILTON — Ray Emery, the former NHL goaltender whose career spanned more than a decade and included stops in Ottawa, Chicago and Philadelphia, drowned in Hamilton Harbour on Sunday, police said.

Insp. Marty Schulenberg said Emery’s death does not appear to be suspicious, calling it a "case of misadventure."

Schulenberg said Emery jumped off of a boat into the water near the Leander Boat Club to go swimming, and his friends called emergency services at about 6 a.m. Sunday when he didn’t resurface.

Emery, 35, played for several teams throughout his 11−year career, winning the William M. Jennings trophy — and the Stanley Cup — with the Blackhawks in 2013.

The rare goalie who didn’t hesitate to drop his gloves, Emery was involved in multiple altercations on the ice, including one in 2007 in which he scuffled with Buffalo Sabres goalie Martin Biron.

Biron was among those mourning Emery online Sunday.

"So sad. Thoughts and prayers to his family and friends," he wrote on Twitter.

Schulenberg said Emery’s body was found at about 2:50 p.m. Sunday, about 20 metres from where he went into the water. He said a post mortem will be completed on Monday.

"Mr. Emery was taking a swim this morning and the circumstances around that are a part of the investigation," said Schulenberg.

"Those details remain to be uncovered by our investigators."

Schulenberg said first responders were not able to locate Emery right away, and so they called in the dive unit. He said the search took longer than anticipated because they had to ensure the safety of the dive team.

"It’s a lengthy process and safety is paramount to our divers," he said. "We need to take the time do it safely and that’s what the delay was."

Several members of the NHL community, including former teammates, coaches and executives who played and worked with Emery expressed their condolences for the Hamilton native.

Current Flyers captain Claude Giroux posted on Twitter: "Ray was a great teammate and an even better friend. Rest in peace Razor. I’ll miss you man."

"Ray’s smile and intelligence made him a magnetic personality," Dubas wrote. "You always rooted for him to reach his vast potential, even as he went through the many ups and downs of his playing career."

Former Leafs forward James van Riemsdyk, who played with Emery in Philadelphia, said on Twitter: "So sad to hear the tragic news about Ray Emery — was a great teammate and person."

"Ray was instrumental in our run to the 2007 Stanley Cup Final, and at his best he brought a competitive edge and combative mentality to the game. On behalf of our entire organization, I wish to extend my deepest sympathies to Ray’s family, friends and loved ones," said Melnyk.

Throughout his career, Emery dealt with off−ice problems, including an incident of road rage, assault of a trainer in Russia and behaviour that led to him being sent home from Ottawa’s training camp.

— with files from Melissa Couto and The Associated Press

Here's what friends are saying:

"Ray’s smile and intelligence made him a magnetic personality. You always rooted for him to reach his vast potential even as he went through the many ups and downs of his playing career." — Toronto Maple Leafs general manager Kyle Dubas.

"On behalf of the Ottawa Senators, I wish to express my sincere condolences on the passing of Ray Emery. Ray was instrumental in our run to the 2007 Stanley Cup Final, and at his best he brought a competitive edge and combative mentality to the game. On behalf of our entire organization, I wish to extend my deepest sympathies to Ray’s family, friends and loved ones." — Ottawa Senators owner Eugene Melnyk.

"I will always remember Ray as a good person first & foremost. I envied his demeanour. He had a contagious personality. People were drawn to him. I made close friendships (because) of him @DaveBolland I will never forget his selflessness. Man this hurts. Rest easy Uncle Ray Ray." — Daniel Carcillo, former teammate.

"So saddened of the tragic news of Ray Emery’s passing. We played together for only a short time but he was a great teammate and competitor. My thoughts and prayers go out to his family and friends. May he Rest In Peace." — Nick Foligno, former teammate and current Columbus Blue Jackets captain.

"Horrible to hear about the tragic passing of Ray Emery. He was an incredible NHL goalie that accomplished so much in the game, a lot of which went under the radar. He was also one of my favourite @TorontoMarlies teammates in his brief time with us. Rest In Peace to a legend #Razor." — Garret Sparks, former teammate with the American Hockey League’s Toronto Marlies.

"The NHLPA’s players and staff send our heartfelt condolences to Ray Emery’s family and friends, following the terrible tragedy that occurred earlier today. Ray will be missed by his many friends within the hockey community." — National Hockey League Players’ Association.

"The Philadelphia Flyers are stunned and extremely saddened to hear of the tragic passing of former Flyers goaltender Ray Emery. Ray was an outstanding teammate and an extremely gifted goaltender. He had exceptional athleticism, was a fierce competitor and battled in every game he played with the Flyers. His performances through the 2009−10 season were a very big part of the team’s success in making the playoffs and reaching the Stanley Cup Final." — Philadelphia Flyers.

"Our hearts go out to the family and friends of Ray Emery, our former goaltender, who passed away early this morning." — Anaheim Ducks.

"The Chicago Blackhawks organization was deeply saddened to hear of Ray Emery’s passing. We extend our heartfelt condolences to his family and friends. The Blackhawks will fondly remember Ray as a fierce competitor, a good teammate and a Stanley Cup champion." — Chicago Blackhawks.