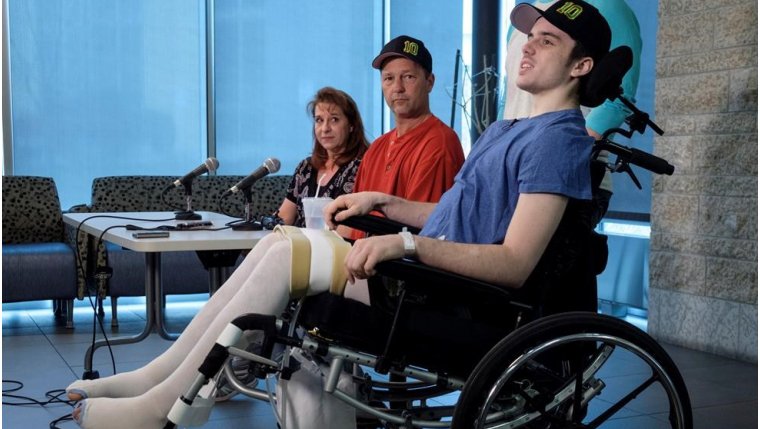 CALGARY — A Humboldt Broncos player who was paralyzed in a bus crash that killed 16 people has vivid memories of the accident but is focusing on regaining his health and hopefully being able to walk again.

Ryan Straschnitzki, 19, sat in a wheelchair Wednesday as he spoke at Calgary’s Foothills hospital, where he is undergoing treatment and rehabilitation.

"I was sitting on the bus texting my girlfriend and getting kind of prepared for the game. All of a sudden I heard a scream from the front of the bus and a semi−truck pulled in front of us and that’s all I remember," said Straschnitzki.

"I kind of blacked out and woke up ... my back was against the semi. I saw my teammates in front of me. My first instinct was to get up and try and help, but I couldn’t move my body.

The collision April 6 between the junior hockey team’s bus and a tractor−trailer unit in rural Saskatchewan is still being investigated. RCMP have only said the transport truck was in the intersection when the crash occurred.

The Broncos were on their way to a playoff game in Nipawin, Sask. Besides the 16 people who were killed, 13 were injured.

Straschnitzki says he and his teammates text message each other every day as they all try to cope with their injuries and grief.

"You think about it and let out some emotion. I’m just trying to push through and get better for those guys that didn’t make it," he said.

"If somebody needs someone to talk to, we’ll contact them. After all this ... we’ve gotten really closer."

Straschnitzki said his rehab is going well and he will continue to push through it despite the pain.

He has spoken about playing sledge hockey for the Canadian Paralympic team, but has set his sights much higher than that.

"I’m just hoping one day I’ll get to that point where I’ll be able to walk again. Some people have said that I won’t be able to, but I kind of want to prove them wrong," he said.

"If you’re negative, I don’t think anything can be done. If you’re positive, you can set those challenges for yourself."

His parents said nothing would surprise them when it comes to Ryan and they’re hoping to get him home as soon as possible.

His father suggested that Ryan’s recovery is very much like hockey.

"We just take it, like I tell Ryan, shift by shift. We’re still in the first period, the fourth shift in, so we’ve still got a full game to go. That’s how we take it," Tom Straschnitzki said.

"We always were proud, but the help he gives everyone else — he is paying it forward."

"Moment to moment. That’s where I’m at. When you’re alone with your thoughts, that’s when I have a hard struggle," she said.

"Being with people and Ryan and our friends and family, it’s easy to be strong then."

Five players remained in hospital in Saskatoon on Wednesday, while eight others have been released or transferred to other care centres.