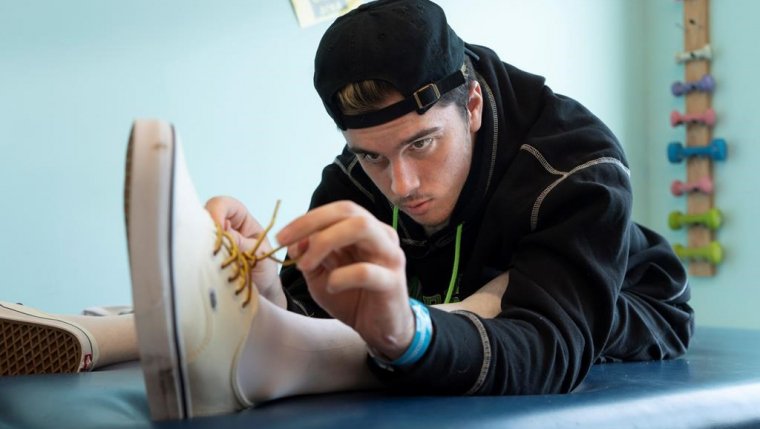 "It’s just hard to keep my neck up," he said during a session this week.

Straschnitzki clenched his fists as he took a stroll on the TheraSlide — a device that puts him in a harness while his feet touch a treadmill below. Staff move his legs and feet forward to simulate walking.

"Wow, my legs are really red," he said during a break. "I feel like I’ve just done one round of boxing."

"Ready to go for Round 2?" asked his father Tom.

Straschnitzki, 19, was paralyzed from the chest down after a fatal bus crash involving the junior hockey team’s bus and a semi trailer in April. Sixteen people died and 13 others, including Straschnitzki, were injured.

He has been in Philadelphia for about a month for therapy to improve his mobility and independence.

"He’s just driven and motivated," said physiotherapist Christin Krey. "He did great today so our intention is to keep moving with that.

"The ultimate goal over time for him is to potentially see some improvements and some muscles that aren’t working right now or some sensory changes or some balance improvements."

Straschnitzki seemed exhausted but excited by the new therapy.

"My legs feel great," he said. "It’s like they’re tingling."

Straschnitzki suffered a spinal injury, broken ribs, a broken collar bone, a punctured lung and bleeding in his head and pelvis in the crash. He got some good news after a meeting with his doctor.

"We talked about a discharge date depending on how things go this week. I’m hoping to go home next week," he said, beaming.

Straschnitzki is focused on life after Philadelphia. He spent an hour this week lifting himself from his wheelchair to a raised platform, simulating moving into the seat of an SUV, which would allow him to hang out with his friends.

His final attempt saw him successfully pull himself up nearly 22 centimetres onto a bed.

"That was tough," Ryan laughed, leaning back and putting his hand over his heart. "That was the hardest thing I’ve done ... that, and showers.

"I just want a normal way of life again ... doing ordinary things that I used to do — just in a different way."

Dr. Bethany Lipa, Straschnitzki’s doctor, said most people in his position don’t realize they have to learn how to do everything again. Straschnitzki has made great progress, she said.

"There are still challenges ahead but he’s a great, really motivated young man and he approaches all the challenges with everything he has," she said. "He’s going to do a fantastic job."

Tom Straschnitzki says his son’s imminent return home to Airdrie, Alta., just north of Calgary, could be put on hold if the family doesn’t have new living arrangements soon. Their home is being renovated and they are waiting to see if they can move into a vacant show home or a local hotel.

"They won’t release him until we have a place to live," he said. "We’re looking into it."

Straschnitzki said he’s willing to stay in Philadelphia and continue working on his rehab until a place is ready. He’s thinking about getting a job, earning a business degree or pursuing a career in broadcasting.

He’s simply glad to be alive.

"I’m not looking at this as a negative," Straschnitzki said. "It’s just a different curve that maybe God has chosen for me, but I’m willing to accept the challenge and live my life to the fullest."