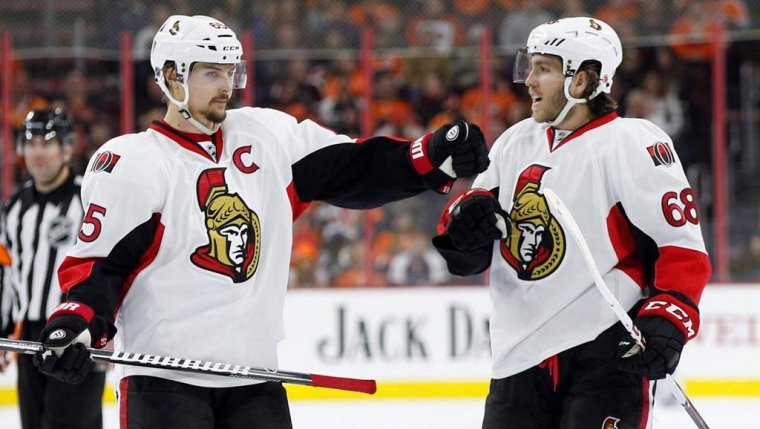 OTTAWA — Less than a week after a story broke about his partner’s alleged harassment of Ottawa Senators captain Erik Karlsson’s wife, Mike Hoffman was traded — twice.

In a news release announcing the trade, Senators general manager Pierre Dorion said the move will "strengthen the future of the team by improving chemistry, leadership and character in the locker room and on the ice."

The release made no mention of the allegations against Caryk, which Hoffman has denied.

The Panthers also did not mention the controversy in their release.

"Mike is a skilled, consistent and hard−working player who has proven himself to be a talented goal scorer in the NHL," Panthers GM Dale Tallon said. "His speed, experience and offensive abilities will bolster our top−six group."

"Mikkel Boedker is a competitive, versatile, two−way forward who can play both wings," Dorion said in a statement. "He has a track record of playing his best hockey in the most important games, including the playoffs and internationally. His skill set — in particular his speed — along with his veteran leadership with with our vision of the team."

Bergman, 22, was San Jose’s second−round choice (46th overall) in the 2014 NHL draft. The Swedish defenceman played in the American Hockey League last season. Donaghey spent most of last season in the ECHL.

"We are confident (the trade) is a step in the right direction for the long−term success of the organization," Dorion said.

The alleged harassment story was one of the latest development in a turbulent stretch for the Senators.

Last week, the Senators suspended assistant general manager Randy Lee, who has a court date in Buffalo next month for a harassment charge. Lee will miss this weekend’s NHL draft in Dallas.

Meanwhile, former captain and fan favourite Daniel Alfredsson was quoted saying at an event in Ottawa he hopes the Senators are sold to an owner other than Eugene Melnyk to ensure their future in the nation’s capital.

Billboards were erected earlier in the year in Ottawa with the hashtag #MelnykOut. Before an outdoor game in December in Ottawa, Melnyk threatened to move the franchise if attendance didn’t pick up.