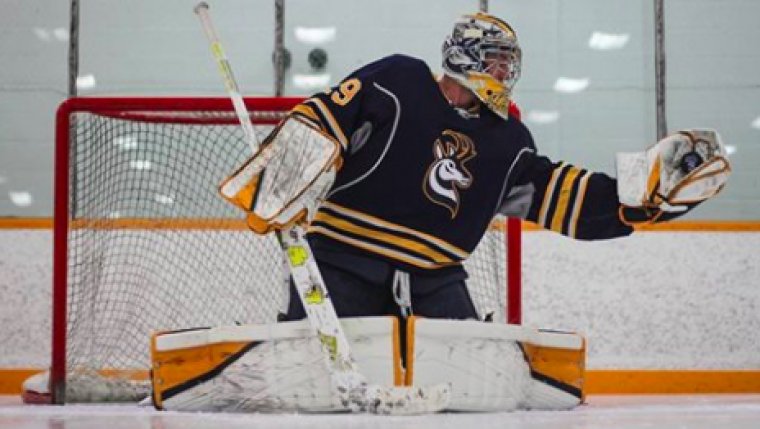 WINNIPEG — A Ryan Chynoweth goal with just 1:09 to go in the third period made the difference on Friday night at Wayne Fleming Arena, as the Lethbridge Pronghorns topped the Manitoba Bisons 5-3. The tally came not long after the hosts had scored to tie the contest at three.

“We battled back and got a short-handed goal to tie it up, and then to give one up right after, that was tough,” said Bisons head coach Mike Sirant postgame.

“We had a lot of chances to score tonight and we didn’t bury our chances when we had them. Regardless of the score today, the message was to keep our heads up, get ready to battle back and compete again and show character, professionalism and get ourselves mentally ready to win tomorrow.”

The Bisons controlled the tempo of play in the first seven minutes of a fast-paced opening period, including a Brett Brooks shot from near the crease that was denied from point blank range by Lethbridge goalie Garrett Hughson.

But a kneeing penalty by Manitoba at 7:46 altered the momentum of the first frame. Just under a minute into the Pronghorns power play, forward Brooks Maxwell walked into the slot and was able to beat Manitoba goalie Byron Spriggs with a wrist shot.

The visitors nearly made it 2-0 with just under five minutes to play, as defender Clint Filbrandt rushed down the right side and had Spriggs down and sprawling, however the fifth-year veteran for the Bisons was somehow able to get a piece of the shot.

Spriggs’s save paid dividends less than a minute later, as Manitoba forward Devon Skoleski raced hard on the forecheck, dispossessed a Lethbridge player from the puck and fed it to line mate Liam Bilton, who went bar down from the slot to tie the contest at one after 20 minutes.

Manitoba went to the power play three minutes into the second period, however it was the Pronghorns who had the best chance to score as they busted in two-on-one. Bisons forward Keaton Jameson stayed patient however, blocking the centring pass.

The Bisons would take the lead shortly afterwards, as first-year forward Jeremey Leipsic got his stick on a centring pass from Mitchell Dyck at 6:33 for his sixth of the year. The tally also propelled Leipsic into fourth place in rookie scoring in the conference.

The visitors had an answer though, as defender Blake Orban had the puck come right back to him on a weird bounce in the Bisons zone at 10:06. He then waited out Spriggs, going top shelf to tie the game at two after 40 minutes.

Lethbridge grabbed the early lead just 3:44 into the third period, as forward Sam McKechnie grabbed a rebound just outside the Manitoba crease.

Zone time significantly shifted in the host’s favour afterwards as they pressed for the equalizer. Forward Jonah Wasylak and defenders Lucas Skrumeda both had a few excellent chances, including a short-handed partial breakaway for the latter with 5:11 to go, however Hughson made a big stop.

But Manitoba’s patience finally paid off just six seconds later, as they won the ensuing face-off after the Wasylak shot and got it to defender Adam Henry, who beat Hughson with a quick snap shot.

The visitors refused to lay down in this one tough, as they controlled possession in the final two or so minutes. They would be rewarded with just over a minute to go, as Chynoweth corralled a loose puck in front of Byron Spriggs for the game-winner.

Jeff Rayman would add an empty-net goal for insurance as the Pronghorns advanced to 8-13-2 and are just one point away from the sixth and final playoff spot. Manitoba falls to 4-17-2 and will need to come up big tomorrow at 2 p.m. to keep their post-season dreams alive.