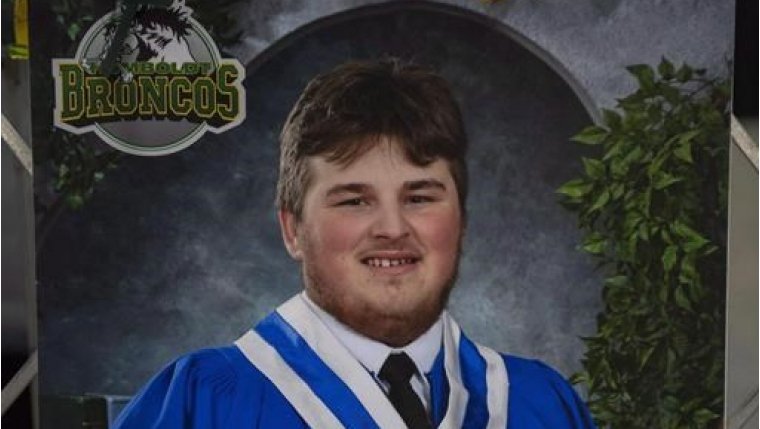 "He said the Vegas Golden Knights were going to be the first expansion team to win the Stanley Cup," recalls Millette.

It warms Millette’s heart to think Hinz may have been right.

The 18−year−old was one of 16 people who died after a truck and a bus taking the Humboldt Broncos to a Saskatchewan junior hockey playoff game collided at a rural intersection April 6. Thirteen others were injured. Hinz was the statistics keeper.

Five days after the crash, the Golden Knights hit the ice in their first National Hockey League playoff game, setting off an improbable Stanley Cup run that has landed them in the finals in the team’s inaugural season.

Hinz, diagnosed with Asperger’s syndrome, a high−functioning form of autism, was described after his death as a gentle giant who went to church every Sunday, volunteered at a soup kitchen and participated in the Special Olympics.

He was also a math whiz with a remarkable memory. He followed several sports and carried notebooks filled with team analysis, says Millette.

Hinz brought some of the books with him to a career class Millette taught and gave a presentation about wanting to work as a general manager, analyst or scout in the NHL.

So it was a perfect fit, Millette says, when Hinz got a volunteer job last fall with the town’s radio station to keep stats for the Broncos.

Millette says it was about that time the Grade 12 student predicted the Knights would win it all — well before the NHL season had started.

Millette questioned whether Hinz was right about an expansion team never winning the finals. Millette looked it up, but Hinz already knew: No modern−era expansion team has won the Cup. The Philadelphia Flyers, part of the 1967 expansion, claimed it in 1974.

"The Vegas Golden Knights are the best expansion team ever," reads the headline in Hinz’s blog entry on Oct. 18.

"When an expansion team plays their first season they usually stink," he wrote. "But that is not the case with Vegas."

Millette says he was stunned as Vegas racked up win after win over the winter. He and Hinz continued their daily sports chats. And Hinz never gave up on Vegas.

Now Millette says he is rooting for Vegas too.

"I get these visions of Brody kind of laughing at me in the halls," he says.

"I’m cheering for Vegas because of Brody. I wouldn’t be otherwise ... I’m a (Montreal) Canadiens fan."

He says his younger cousin knew everything about sports. He recalls a friendly argument they had at Christmas over the number of goals scored by Edmonton Oilers star Connor McDavid.

"Google and Brody always proved me wrong," he says.

His cousin also loved the Winnipeg Jets, so Daniel Hinz says he was torn about who to cheer for when the Jets and Knights met each other in the playoffs. Now, he and many in Humboldt are all in for Vegas.

There are definitely more Knights fans in the community of 5,800 because of Hinz, says Humboldt’s high school principal Cory Popoff. He gave the eulogy at Hinz’s funeral and told the crowd about the young man’s prediction.

Popoff also recalls talking with Hinz at school about Hinz’s crazy hunch. Popoff, a Toronto fan, teased him about not cheering for the Maple Leafs.

Popoff laughs while wondering out loud how much Hinz might have won had he gone to Las Vegas last fall and put money down on the Knights. Some bookies initially placed the odds of the team winning at 500−1.

"People can remember facts. They can remember data. But when you put it together and generate a prediction, that is the gift — one of the many that I believe he had."

The principal plans to watch the rest of the series at home, just as he has the other playoff games, and think of Hinz.

"It’s just like Brody’s sitting right next to me going, ’See, Mr. Popoff!’"