Hockey Tournament in May to Support Humboldt Broncos 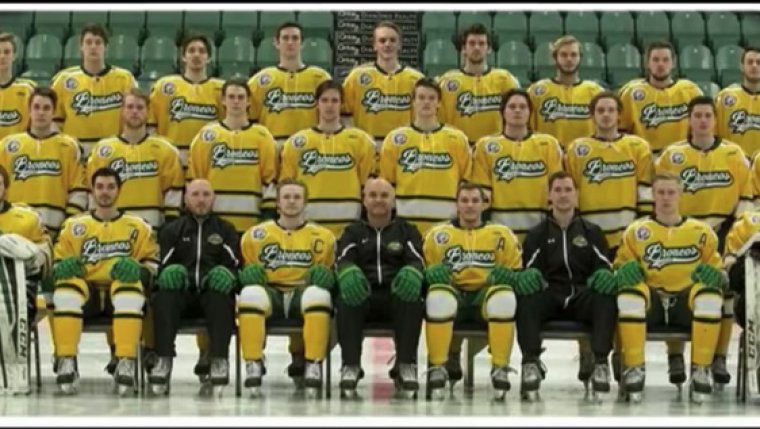 The brother of a Humboldt Broncos player who was injured in a Saskatchewan bus crash that killed 16 people is organizing a hockey tournament to show his gratitude to the community.

Ryan Gobeil, who works for the Swift Current Broncos of the Western Hockey League, plans to hold a four−on−four fundraising hockey tournament at the Credit Union iPlex in Swift Current, Sask., in May.

"We had a lot of support from groups around Saskatoon and the province and Canada," said Gobeil, referring to organizations such as STARS Air Ambulance and Ronald McDonald House as examples.

"Those groups have given a lot to us. They are the reason why my brother and people’s sons and brothers and nephews were able to make it. For us, it’s a way to give back."

Gobeil’s younger brother, Morgan, is recovering from his injuries at Royal University Hospital in Saskatoon.

The 18−year−old was one of 13 players injured on April 6 when the team’s bus and a semi−trailer collided in a rural Saskatchewan intersection.

A GoFundMe campaign was created immediately and raised $15.2 million in less than two weeks for the players and families affected by the crash. The money has been transferred to a new non−profit corporation called the Humboldt Broncos Memorial Fund Inc. and is expected to be distributed in the coming months.

A separate HumboldtStrong Community Foundation was created to continue taking donations from people who want to help.

"People want to continue to contribute and support and provide funds," said Kevin Garinger, president of the Humboldt Broncos.

He said the foundation will support players, employees, families and volunteers, as well as first responders and emergency services personnel, teams, athletes, related organizations and communities affected by the crash.

"It will provide supports to all these people who have been impacted or have been involved in supporting us."

Gobeil said any money raised through the hockey tournament, which is to be held May 11−13, will go to the community foundation.

"This is the perfect way for me to give to that foundation, which is going to be able to give to other groups for years to come."

Playing hockey is also one way for people to start healing and move forward, Gobeil suggested.

"We’re kind of at the start of a new chapter," he said. "I know my family’s life and a lot of people’s lives changed."

Several other individual fundraisers are still being held across Saskatchewan and Alberta.

In the Edmonton area, nearly $100,000 was raised in memory of Parker Tobin, an 18−year old goalie who died in the crash. It will be used to establish a scholarship fund to help future goalies.

Friends of player Ryan Straschnitzki, who was paralyzed from the chest down, have started a #StrazStrong fundraiser in Airdrie, Alta., to help him with costs related to his ongoing recovery at Foothills Hospital in Calgary.

In the northern community of La Ronge, Sask., people are also raising money for injured player Bryce Fiske through donations and community fundraisers.

"We’re just trying to help Bryce," said Jenny Nicol, who has helped raise $6,600. "He’s going to need it when he gets out of hospital."