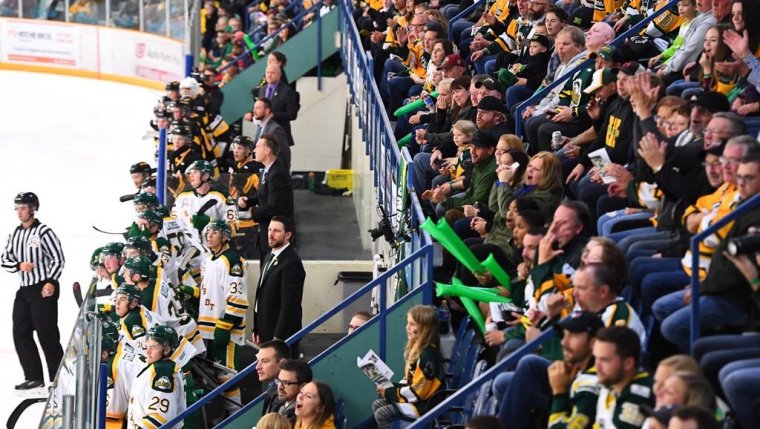 The Broncos fell 2−1 to the Nipawin Hawks on Wednesday — their first regular−season game since a team bus crash claimed 16 lives on April 6th — but the game prompted an outpouring of support from the hockey community as the team returned to the ice.

Hayley Wickenheiser, a four−time Olympic gold medallist and career leading scorer for the Canadian women’s national hockey team, sent her best wishes to the Broncos ahead of the game on Twitter.

"Sending good luck and thinking of @HumboldtBroncos playing their season opener tonight and remembering all of those lost or injured. Sure to be an emotional night but the heart always carries the feet. I’m putting my stick back outside for this one!" she tweeted.

"Sending a big good luck to @HumboldtBroncos organization as they get set to play their first game of the season," she tweeted.

Former Calgary Flame Sheldon Kennedy — who played three seasons of junior hockey for the Swift Current Broncos — said he was thinking of those affected by the Humboldt crash, as well as the four players killed in his own team’s 1986 bus crash.

"My thoughts are with the families, first responders and communities impacted heading into tonight’s @HumboldtStrong game," he tweeted.

"I also won’t ever forget our @SCBroncos friends and teammates."

"Tonight the @HumboldtBroncos take the ice for their home opener. Going to be an emotional one. The hockey world is with you all. Good luck tonight boys!" he wrote.

Ryan Gobeil — whose younger brother, Morgan, suffered a significant brain injury in the crash — posted a photo on Twitter with two hockey sticks.

Carley Matechuk — the sister of Layne, who also suffered a brain injury in the collision — wished the team luck during its upcoming season.

"Wish I was watching you play tonight... Goodluck to the 18/19 broncos. I hope that #Hockeyheals #Humboldtstrong," she wrote.

"Absolutely beautiful home opener for the Humboldt Broncos. I feel privileged to be able to witness something so powerful and inspiring. Thank you," he tweeted.

Wednesday’s emotional match also led prominent Canadians from outside the hockey world to reach out.

"Welcome back, Broncos − Canadians across the country will be with you on every shift tonight," he tweeted.

"Canadians stand with you @HumboldtBroncos. We’ll be cheering you on for your home opener tonight!" tweeted Scheer.

"Wishing the best of luck to the #HumboldtBroncos as they play their first regular season game tonight! Our hearts are with the team, the families and the community as we remember those we lost, and together, look ahead to an exciting season," said Singh on Twitter.

The Broncos were headed to Nipawin, Sask., for a Saskatchewan Junior Hockey League playoff game against the Hawks when their bus collided with a tractor trailer at a rural intersection on April 6. Sixteen people, including 10 players, died in the crash and 13 were injured.

With files from Ryan McKenna.