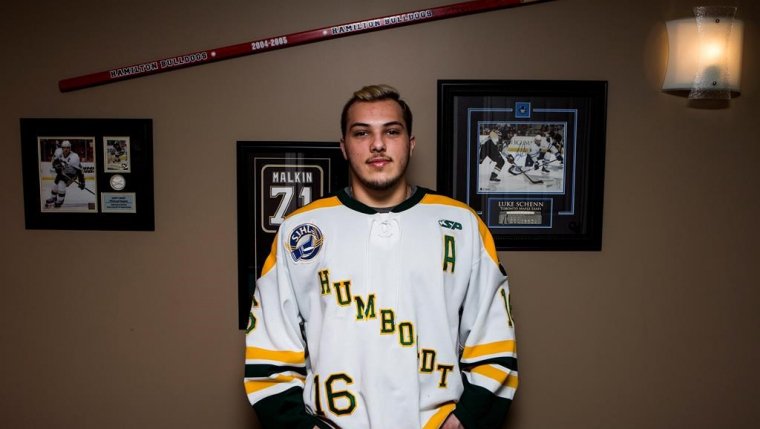 SASKATOON — Humboldt Bronco forward Kaleb Dahlgren remembers putting on his suit during the bus ride to a playoff game, returning to his seat and asking his friend and teammate, Nick Shumlanski, to point out his family’s house along the highway.

Dahlgren retorted that he cared and everyone roared with laughter again.

"Four days later, I wake up in the hospital."

Dahlgren, 20, was one of 13 players injured April 6 when the junior hockey team’s bus and a semi−trailer collided in rural Saskatchewan. Sixteen people — including 10 players — were killed.

His friend, Shumlanski, was one of the only passengers to walk away from the wreckage. Tobin died in the crash.

"I remember waking up and looking at my parents and saying, ’Am I dreaming?’"

No, responded Mark and Anita Dahlgren.

"Did we win our game?" asked Kaleb, who suffered a fractured skull, a puncture wound in his head, a brain injury, two broken vertebrae in his neck and four others in his back.

They told him he didn’t play.

Confused, Dahlgren still thought he was injured in a hit during the game. His parents explained what actually happened.

"I had no clue, really, about anything outside the hospital," he recalled this week. "It was really tough for me to grasp."

He didn’t know about the people, including his coach, who were killed in the crash.

He didn’t know who else was injured.

He didn’t know that the world had rallied around the team, raising more than $15 million in a GoFundMe account and displaying support by putting hockey sticks on porches and wearing jerseys.

Dahlgren’s parents suggested he check his phone if he didn’t believe them, so he did.

"It was the real deal. It really hit home."

Dahlgren was released from hospital April 27. As of the end of last month, four of his teammates remained in hospital in Saskatoon. Others had been moved to health−care facilities closer to their homes.

The family of Xavier Labelle released a statement Monday that said he is healing from his multiple injuries and continues his rehabilitation at Saskatoon City Hospital.

Dahlgren also has a long recovery ahead: six to eight weeks for the vertebrae to heal, three to six months for the brain injury, and another year or two before his brain fully recovers.

He said that before he was released from hospital, he had a visit from a first responder who treated him at the crash site.

"He said I was helping everybody," said Dahlgren. "When he showed up on the scene, I was trying to make sure people were OK. I was going person to person just to see how they are doing.

"I have no recollection of that at all."

Soon afterward, he was put on a stretcher and sent to hospital.

Doctors told Dahlgren that there’s still a possibility he’ll remember the crash one day, but he’s not entirely sure that he wants to.

"In other ways, I’d like to remember because then I’d remember what I was saying to them. But I know all the people we lost in the accident. I know that they all knew how I felt about them.