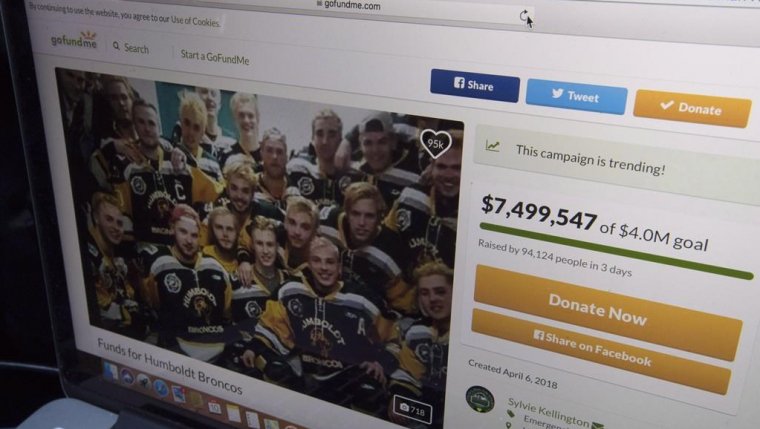 SASKATOON — A court hearing related to money raised following the Humboldt Broncos bus crash will be the first real test of Saskatchewan’s efforts to regulate crowdfunding campaigns, says a lawyer for the fund.

The Humboldt Broncos Memorial Fund Inc. is to ask Saskatchewan Court of Queen’s Bench on Wednesday for an initial order that would declare a GoFundMe campaign a public appeal, authorize the money to be held in trust and approve an interim payment of $50,000 each to the 13 survivors and the families of the 16 people who died after the April 6 crash.

The GoFundMe campaign raised $15.2 million in donations from all over the world.

The money has yet to be distributed because Saskatchewan has legislation known as the Informal Public Appeals Act, which outlines court−supervised payouts.

"This is a new law that was enacted in Saskatchewan in 2015," said Jeff Lee, a lawyer who represents the Humboldt Broncos Memorial Fund Inc.

The legislation was recommended in 2012 by a national body called the Uniform Law Conference, which proposes changes when gaps are identified in existing laws.

"Saskatchewan was the only province that stepped up and actually enacted that statute into law and this would be the first occasion in which it’s been considered in court," said Lee.

Under the law, a court hearing can be requested by a trustee, a donor, a person who benefits from a fund, the attorney general or anyone the court considers has a sufficient interest in a fund. In the Broncos case, a hearing was requested by the Humboldt Broncos Memorial Fund Inc.

Some have expressed concerns that the courts could take too long, but Lee said that’s why there will be a request for an interim payment.

He and other legal experts said the law is meant to improve the overall process and deal with any disputes that could tie money up for years.

Peter Lown, chair of the committee on program development and management with the Uniform Law Conference, said the law was initially recommended because of an increasing number of public fundraisers.

"Everybody says, that’s terrible, that’s the most awful thing that’s happened — I should help out with that," he said. "So what does that mean? How are they going to be helped? Is there a differential for survivors and non−survivors or families? What can it be used for? How much of it can be used?

"Somebody has to take responsibility for doing all of that. Otherwise it’s just total chaos."

Lown, who’s also a retired law professor at the University of Alberta, said courts can act as guides by introducing "some structure without suffocating it and without turning it into a long process of litigation."

Potential legal traps identified included questions about what to do with a surplus if too much money is raised or an insurance company picks up some costs. The Saskatchewan law also offers legal protection to people who spearhead fundraisers.

As part of the initial order Wednesday, the court will be asked to approve a committee to determine how the rest of the Broncos GoFundMe money is to be distributed.

It would be made up of retired Saskatchewan justice Dennis Ball; Mark Chipman, chairman of the company that owns the NHL’s Winnipeg Jets; Olympic gold medallist Hayley Wickenheiser; Dr. Peter Spafford, who’s in charge of head and neck surgery at the University of Saskatchewan’s College of Medicine; and Kevin Cameron, executive director of the Canadian Centre for Threat Assessment and Trauma Response.

The committee would prepare a report with recommendations to the memorial fund board within the next couple of months. The board would then return to the courts for final approval.