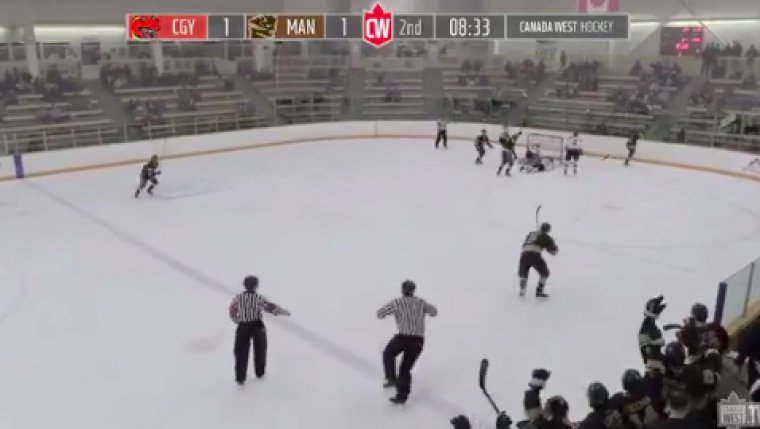 WINNIPEG - After losing 12-games straight, the University of Manitoba Bisons got a monkey off their back Saturday afternoon at home with a 3-1 win over the Calgary Dinos.

Forward Zach Franko scored his fourth and fifth goals of the season, including the game-winner for the Bisons in the second period, while goalie Byron Spriggs made 35 saves.

“To respond from last night’s game with the short roster we had because of all the injuries, it was a great team win. It started with Byron out. He was outstanding in goal, the defence played much better tonight, our forwards had some timely goals, our power play scored when it needed to and our penalty kill was good again tonight.”

Calgary forward Cain Franson had an excellent chance from the left slot four minutes in, however Manitoba goalie Byron Spriggs shifted cross-crease to make the save. One minute later, line mate Tim Vanstone was sprung on a partial breakaway, however Bisons defender Mackenzie Dwyer showed excellent hustle to get back and steal the puck away,

Two minutes later, the hosts — who were playing with just ten forwards — got their first quality chance, as forward Kamerin Nault worked hard near the crease to secure the puck, but was stymied by Dinos goalie Jordan Papirny.

Calgary’s Ryan Graham thought he’d opened the scoring just under halfway through the period on a power play, however the goal was called off due to goaltender interference after Logan Fisher fell into Spriggs.

The visitors would make no mistake with the two-man advantage though, as Fisher delivered an accurate pass near the goal line to forward Coda Gordon, who scored on a one-timer.

Manitoba pressed hard for the equalizer and nearly tied the game on two separate occasions. First, Jonah Wasylak blasted a shot from the left slot that squeaked though the five-hole of Papirny, but not the goal line with three minutes to go, then a minute later the Calgary netminder stopped forward Devon Skoleski on a partial breakaway to ensure the score remained 1-0.

The second period hasn’t been kind to the Dinos this season and it continued to rear its ugly head on Saturday, as Manitoba scored two unanswered goals.

The first tally from the hosts came at 5:50, as defenceman Adam Henry picked up a loose puck near the Dinos left slot and went bar down on Papirny.

The second goal came courtesy of a five-on-three with 8:32 left, as Nault made an excellent no-look pass to Franko who made no mistake top shelf.

Calgary’s best chance of the period came six minutes in shorthanded, as Franson and Chris Rauckman came in on a two-on-one, however the former’s drop pass to the latter was stopped on an excellent left pad save from Spriggs.

"It was as good as I've seen him, He was on top of his game today," Sirant said of Spriggs' performance.

Manitoba put early pressure on the Dinos in the third period and their persistence paid off at 5:37, as Franko netted his second of the game, stealing a loose puck and putting a wrist shot past Papirny.

Calgary would push back with a number of chances, including a Ryan Graham shot that went off the post on the powerplay with eight minutes to go, but couldn’t solve Spriggs.

Both teams will now go on the holiday break and will be back in action in the new year. Manitoba will face Alberta on the road on Jan. 4, while Calgary will host Saskatchewan.