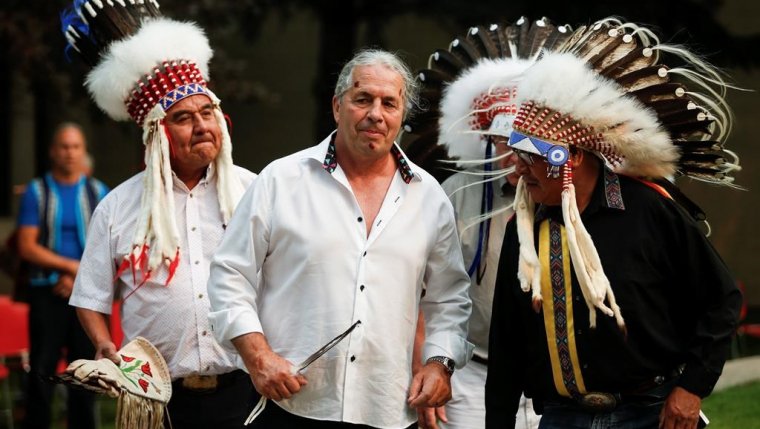 CALGARY — Bret (The Hitman) Hart may go with a new nickname in the future.

The legendary wrestler, who made his in−ring debut in 1978 and took part in nearly 3,000 matches before his retirement, was given an honorary Blackfoot name at an Indigenous ceremony in Calgary on Thursday.

"I think it’s a great name. It might be too bold a name for me, but it tops Hitman anyway," Hart said.

Hart, 61, was born into a legendary wrestling family led by his father Stu Hart, founder of Calgary’s Stampede Wrestling.

He said receiving the name was important since the Blackfoot had planned at one point to give the honour to his father before he died.

"He was sorry it didn’t happen for him and some of the others in the family. I feel it’s one of those things that got left undone from years ago that would have meant a lot to my father, to be here today (and) to see this moment for the whole family," said Hart.

"It was kind of a lost moment and I feel I’m here today to pick up that gauntlet and bring it back to life. I can feel that both my mother and my father would be very proud of this."

Hart said his father always had strong ties to the First Nations community and held wrestling events on reserves across Western Canada.

"My father always appreciated what the native people did for him. They supported him for years and years. The wrestling shows he ran on reservations were usually an effort to raise money for the reserve."

Hart gained popularity and championship success throughout the 1980s and 1990s in the World Wrestling Federation, where he was part of the Hart Foundation.

He has had serious health issues, including a significant stroke in 2002 that left him partially paralyzed. He recovered successfully and also underwent surgery for prostate cancer.

"We started to watch them on TV in the late ’60s on a black−and−white TV. For myself, watching him, I never knew in the future that I would be paying my respects to a great warrior," Wolfleg said.