No Country for White Men 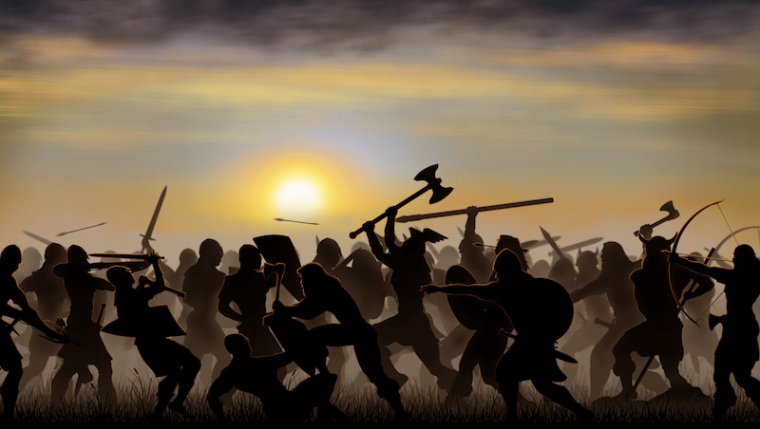 History is full of cruelty, oppression, war, conquest and colonization. As soon as humans learned to wield crude clubs and organized themselves into clans and tribes, they began using power and violence to assert their will over other humans.

There really aren’t any humans who were immune from the infection of violence. Regardless of culture, continent, nation, colour or creed, our ancestors always found someone to subjugate. And the subjugation of others required that they were seen as lesser peoples. The victors wrote the history and installed themselves in a higher place than the vanquished.

No matter who we are or where we come from, if we go far back enough, our ancestors have been both the victors and the vanquished at some point in history.

But here’s the thing; their place in history as either, was purely an accident. It was not ordained, it was not because of genetics or inherent superiority, it was a matter of timing. It was place, circumstance, leadership, technology and access to resources including population size that made a particular people strong at a particular time in history, or left them vulnerable.

Over millennia, the many victor empires have included the Abbasid, Egyptian, Mauryan, Mayan, Aztec, Inca, Greek, Roman, Sumerian, Italian, Ottoman, Spanish, Chinese, Japanese, British, French, Carthaginian, Malian and Mongol. Each of these victors vanquished others as they expanded their empires. And each enslaved, uprooted and murdered their way to the top.

Amongst the latest of victors to colonize new lands have been the European powers. By the 17th century, the colonies of Spain, Portugal, England and France had consumed all of the Americas and Australia and held large swaths of Africa and Asia.

European powers derived their superiority through a timely combination of technology and navigational advances. As they sailed across the seas, they came upon peoples with lesser technology and lesser means to resist. The consequences for the colonized included slavery, economic exploitation and genocide.

And all though Europeans were amongst the last of the colonizers, they are the most recent in history. The colonization by “white” Europeans is a living memory for hundreds of millions of people in Asia, Africa and the Americas. Millions were enslaved and many millions died. In the Americas, the colonized were permanently displaced in their own lands.

The days of conquering other lands to inhabit are mostly behind us. Despite the atrocities of conquest and colonization of other peoples throughout history, the colonization by “white people” of Europe is the one remembered and talked about most. Particularly by the “brown’ people who suffered and continue to experience the intergenerational impacts of subjugation.

In contrast, many argue that the white European diaspora in many former colonies continues to enjoy a collective privilege. The point is often refined further to say that this privilege is almost exclusively the domain of white men. But what exactly does this ‘white privilege’ look like? Is it even real?

If the argument is that people defined as white, as a group, face fewer barriers and a lesser stigma of discrimination and prejudice, then I can accept that case. If we also mean that this privilege is more a system that denies people of colour opportunities rather than giving more opportunities to white people, the case is valid.

It is true that advantage can and does carry across generations and that collectively, white men continue to enjoy a better standing relative to women of all complexions, Indigenous people and visible minorities.

And here we are in 2019 and this narrative, despite its factual basis, is becoming a new form of deep division. Non-whites and even white women insist on confronting white men’s privilege while many white men question this assertion’s validity. But why are we drawing battle lines around the question of white privilege?

Even though the notion of white privilege must be very foreign to working white men as they struggle to make ends meet, this divide, this confrontation is rooted in our colonial history. For the colonizers and the colonized, this imbalance must eventually be confronted and resolved. But how?

We can agree that no people, by colour, origin or creed hold a monopoly over racism and prejudice. White people, particularly white men, are no different than any other population segment in Canada. Amongst them are large proportions of kind and good people and a far smaller segment of bigots and racists as there are in any population.

In the first episode of the groundbreaking APTN series First Contact, Kevin Lamoureux from the University of Winnipeg tells his non-Indigenous guests that “residential schools are not your fault” and that the guilt of residential schools “is not owed to them”.

There is incredible grace, generosity and healing virtue in Lamoureux’s message. He makes a critical distinction that we can acknowledge past and present-day injuries caused by a difficult history without alienating the descendants of the offenders. And this is a lesson we need to adopt as part of our daily living as we seek to reconcile.

If we are to correct an errant course set long ago, we need to invite as many allies as possible to this common cause. And that includes white men. If we make the mistake of asking them to be personally accountable for history, we may alienate them and risk a counterproductive backlash that is already materializing. White supremacists’ efforts to position white men as the new minority is starting to find troubling traction.

Given the uneven distribution of this privilege, the continued suggestion that white men owe a personal debt to the historically disadvantaged rings hollow for many who face this accusation. Especially when they personally enjoy no particular privilege and their complexion confers no advantage whatsoever.

Somewhere along the way, the desire for resolution of legitimate historic grievances and hardship may well have created a new injury and alienated a group of our fellow citizens who want exactly what we all want. And that is, a fair and decent society where people can coexist as equal and prosperous citizens of a place we can all be proud to call home.

In Lamoureux’s words, that’s a question for each of us; “do I want to contribute to the solution?” And the solution will only be found if all Canadians, including white men, acknowledge our history and ease the journey of those who are still struggling with intergenerational impacts of our colonial past. That is, and must remain, our common journey as one people.