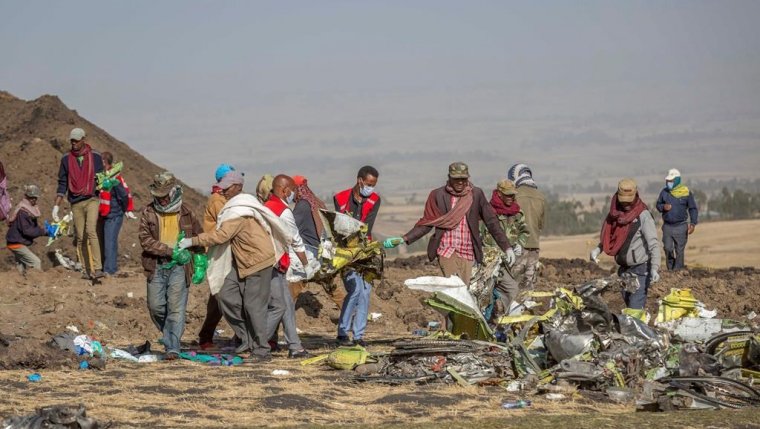 A team of U.S. aviation experts has arrived at the site where an Ethiopian Airlines jetliner crashed, killing 157 people on a flight to Kenya.

A Federal Aviation Administration statement said the American agency’s people were at the crash site outside Ethiopia’s capital on Monday with representatives of the National Transportation Safety Board.

They are joining an Ethiopian−led investigation that includes authorities from neighbouring Kenya and elsewhere.

The new Boeing 737 Max 8 jetliner went down six minutes after takeoff from the airport in Addis Ababa in clear weather on Sunday.

The FAA says it plans to soon issue an update to operators of that Boeing model. Boeing will be part of the investigation.

A witness to the Ethiopian Airlines crash says smoke was coming from the rear of the plane before it hit the ground, killing 157 people on board.

Tamrat Abera tells The Associated Press the plane rotated twice before crashing and exploding. Smoke rose high into the sky.

An international team of investigators led by Ethiopian authorities is looking into the cause of Sunday’s crash. Several countries and companies grounded their Boeing 737 Max 8 fleets out of caution.

A U.N. official says thousands stood in silent tribute to victims of the Ethiopian Airlines crash at the opening of the U.N. Environment Program’s Assembly in Nairobi on Monday. Some people who had been travelling to the meeting were among the 157 dead.

Assistant Secretary−General Satya Tripathi tells reporters that "there’s a lot of grief that’s not just for the U.N. colleagues but ... because there have been losses on the side of member state delegations, the civil society community and others as well."

Tripathi said there is a "renewed resolve" to do what more than 4,700 attendees had come to do: "preserve the cause of the environment and the planet."

The U.N. secretary−general and presidents of France and Kenya are expected to attend this week.

An official at Royal Air Maroc says Morocco has halted the commercial use of its sole operational Boeing 737 Max 8, pending tests and examinations of the airplane after the Ethiopian Airlines crash on Sunday.

The official, who spoke anonymously in line with his department rules, said the plane was scheduled to fly on Monday from Casablanca to London but was replaced.

The official said the plane, in use since December, was undergoing an "inspection and verification" procedure by a Moroccan team and would be operational after tests are done.

The official said Royal Air Maroc received a second Boeing 737 Max 8 airplane a few days ago, part of a deal with Boeing for acquiring a total of four.

A number of airlines have grounded the planes.

Comair, the operator of British Airways and Kulula flights in South Africa says it has grounded its Boeing 737 Max 8 while it consults with Boeing, other operators and technical experts.

A statement does not say how many planes are affected. It says the decision was made without intervention from regulatory authorities.

Comair joins a number of other airlines in grounding the planes after Sunday’s deadly crash in Ethiopia.

Wrenelle Stander, executive director of Comair’s airline division, says in the statement that Comair "remains confident in the inherent safety of the aircraft."

The United Nations secretary−general says at least 21 U.N. staff members died in the Ethiopian Airlines crash on Sunday along with an undetermined number of people who had worked closely with the world body.

Antonio Guterres spoke at the opening of the annual meeting of the Commission on the Status of Women, which began with hundreds of delegates standing in silent tribute to the 157 victims.

The U.N. Security Council also began its meeting on Afghanistan with diplomats standing in honour of those who perished.

Guterres said that "a global tragedy has hit close to home and the United Nations is united in grief."

He said the U.N. staff members came from all corners of the globe and that "they all had one thing in common — a spirit to serve the people of the world and to make it a better place for us all."

A Greek man who narrowly missed the Ethiopian Airlines flight that crashed near Addis Ababa on Sunday says he argued with ground staff to try and board after reaching the gate minutes too late.

"I saw the last passengers going through but the gate had already closed. I complained, in the usual way when that kind of thing happens. But they were very kind and placed me on another flight," Antonis Mavropoulos told Greece’s private Skai Television, speaking from Nairobi.

Mavropoulos, who runs a recycling company and lives in Athens, was travelling to Kenya to attend an environmental conference.

"I’m slowly coming to terms with what happened and how close it came. On the other hand, I’m also very upset — I’m shattered — for those who were lost," he said in the interview Monday. "To be honest, I didn’t get much sleep last night."

Mavropoulos put his survival down to luck.

"I didn’t check my suitcase because I knew the gap between connecting flights was tight. If I had checked the bag in, they would have waited for me," he said. "This is a very difficult moment — one that can change your life."

Ethiopia’s state−affiliated Fana Broadcasting Corporate cites the United States ambassador as saying a six−member team of U.S. aviation experts are on their way to the site of Sunday’s crash.

Ambassador Michael Raynor visited the crash site on Monday. He told the broadcaster that the experts from the Federal Aviation Administration and the National Transportation Safety Board were expected to arrive at the site on Tuesday.

The flight data recorder and voice cockpit recorder have been found.

Ugandan authorities say a senior police officer is among the dead in the Ethiopian Airlines plane crash on Sunday.

Ugandan police say they are mourning Christine Alalo, who served as police commissioner under the banner of the African Union mission in Somalia.

The statement calls her "a highly respected member of the force who loved her job."

Alalo was returning from a trip to Italy. She is the lone Ugandan who died in the crash. All 157 on board were killed.

A German pastor and an aid worker from Germany are among the victims of the Ethiopian Airlines crash on Sunday.

The World Council of Churches says Rev. Norman Tendis was travelling to a U.N. environment summit in Nairobi. The 51−year−old worked in Villach, Austria.

The German development aid organization GIZ confirms that a staffer was on the plane. Spokeswoman Tanja Stumpff tells The Associated Press that the woman was on a business trip.

Germany’s Foreign Ministry has confirmed that at least five German citizens died in the crash.

The aid group in a statement says Sara Chalachew, Getnet Alemayehu, Sintayehu Aymeku, and Mulusew Alemu had been travelling to Nairobi for training.

The four had worked with the organization for as long as a decade. They worked in procurement, logistics and finance.

All 157 people on board were killed. They came from 35 countries.

There are scenes of agony as members of an association of Ethiopian airline pilots cry uncontrollably for colleagues killed in Sunday’s crash near Addis Ababa.

Framed photographs of seven crew members sit in chairs at the front of a crowded room.

One pilot says he had planned to watch a soccer game between Manchester and Arsenal with the flight’s main pilot, Yared Getachew.

It was Getachew who issued a distress call shortly after takeoff and was told to return. But all contact was lost.

Another pilot says he flew with Yared several times and said they even lived together before becoming senior pilots.

Pope Francis has sent his condolences to the families of the victims of the plane crash in Ethiopia.

Cardinal Pietro Parolin, the Vatican’s secretary of state, said in a statement Monday that the pope was sad to learn about the crash and "offers prayers for the deceased from various countries and commends their souls to the mercy of Almighty God."

The statement said, "Pope Francis sends heartfelt condolences to their families, and upon all who mourn this tragic loss he invokes the divine blessings of consolation and strength."

Shares of Boeing are tumbling before the opening of U.S. markets following the crash in Ethiopia of a Boeing 737 Max 8, the second deadly crash since October.

All 157 people on board were killed on Sunday. A Lion Air model of the same plane crashed in Indonesia last year, killing 189 people.

Shares of Boeing Co. plunged more than 9 per cent in premarket trading Monday. If that trend holds, it could be one of the company’s worst trading days in about a decade.

Indonesia and China have grounded all Boeing 737 Max 8 aircraft. Ethiopian Airlines and Cayman Airways are doing the same.

Ethiopia’s state−affiliated Fana Broadcasting Corporate reports that the black box has been found from the crashed Ethiopian Airlines plane.

An airline official, however, tells The Associated Press that the box is partially damaged and that "we will see what we can retrieve from it."

The official spoke on condition of anonymity for lack of authorization to speak to the media.

The plane crashed shortly after takeoff from Addis Ababa on Sunday en route to Nairobi.

Chinese foreign ministry spokesman Lu Kang says the other Chinese passengers included four who were working for a Chinese company and two who had travelled to Ethiopia for "private matters."

All 157 people on board the flight to Nairobi died.

China has ordered its airlines to ground their Boeing 737 Max 8 aircrafts by 6 p.m.

The United Nations migration agency said that one of its staffers, German citizen Anne−Katrin Feigl, was on the plane en route to a training course in Nairobi, the capital of Kenya and the plane’s destination.

The ministry said in a statement Monday that it was in contact with the families of the victims. It did not reveal any information on the identity of those who died in the crash Sunday.

All in all, 35 countries had someone among the 157 people who were killed. All people on board died minutes after takeoff from Addis Ababa.

The U.N. office in Nairobi is joining Ethiopia in mourning the 157 dead in Sunday’s Ethiopian Airlines crash shortly after takeoff from Addis Ababa.

A moment of silence and U.N. flags at half−staff marked the deaths that included several workers with U.N. and affiliated organizations.

The U.N. resident co−ordinator in Nairobi, Siddharth Chatterjee, says that "This has taken us by shock. ... But it also goes to reinforce the mortality of human life and therefore reinforces the need for humanity."

He says U.N. Secretary−General Antonio Guterres sent "a poignant message of condolences to everybody, not just the U.N. staff but the crew of the flight and all other nationalities which were on the plane."

A spokesman says Ethiopian Airlines has grounded all its Boeing 737 Max 8 aircraft as a safety precaution, following the crash of one of its planes in which 157 people were killed.

Asrat Begashaw said Monday that although it is not yet known what caused the crash on Sunday, the airline decided to ground its remaining four 737 Max 8 planes until further notice as "an extra safety precaution." Ethiopian Airlines was using five new 737 Max 8 planes and was awaiting delivery of 25 more.

Begashaw said searching and digging to uncover body parts and aircraft debris will continue. He said forensic experts from Israel have arrived in Ethiopia to help with the investigation.