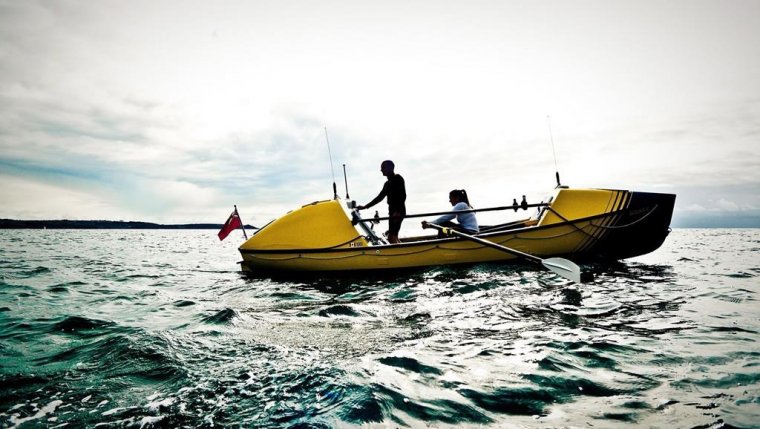 After spending three months rowing a small boat across the moody Atlantic Ocean, father−daughter duo John and Libby Beeden say they’re wobbly but relieved to have arrived on solid land.

It wasn’t always a given, John Beeden said. The winds and currents were working against them for the last leg of their 91−day journey from Portugual to the Caribbean island of Antigua.

"We’re happy to be on terra firma," he said in a phone interview from Antigua. "The weather’s been really difficult the whole way. Over the past two weeks things just got harder and harder. So we’re just so happy to make Antigua, because for a while it didn’t look like we were going to make Antigua."

Libby Beeden, 20, described waves as tall as six metres crashing into their six−metre−long yellow boat, made of close−cell foam with shells of kevlar and fibreglass.

The frustration was palpable on the blog they updated via satellite phone over the course of their journey. "ARE WE THERE YET?" the headline of one blog post screams. "WHAT THE B****Y HECK HAVE WE DONE TO DESERVE THIS?" another reads.

"Desperate to get off this boat," Libby Beeden wrote in the days leading up to their journey’s end. "It’s too hot, I’m melting!"

The elder Beeden, who is from the U.K. but now lives in Collingwood, Ont., was already a record−setting rower when he set out in November. In 2015, he became the first person to row solo, non−stop from North America to Australia in a journey that took 209 days.

His daughter had considerably less experience.

"I look at things from a jaded old man’s approach, and Libby’s only 20," John Beeden said. "She conquered all these fears of high waves and rowing at night."

They took turns rowing in a bid to keep moving forward 24 hours a day.

But in spite of the largely harrowing journey, there were some high points.

"I was cleaning barnacles off the bottom of the boat, and Libby shouted at me and there was a whale about 10 feet (three metres) away from me," John Beeden said, noting that while they aren’t sure, they think it was a minke whale.

"You can be quite depressed with how bad the conditions are, but if a whale or a pod of dolphins comes by, it kind of lifts your spirits," he said. "It’s cool that they choose to come of their own volition."

The younger Beeden said that on the last full day of their journey, she and her father saw a leatherback sea turtle swimming in their wake. The sea turtles can weigh up to 700 kilograms, and measure up to 2.2 metres in length.

Now that they’ve reached their destination, the Beedens said they’re going to take some time to decompress.

"I’m sat with a plate of avocado toast and fresh fruit at the moment," Libby Beeden said. "I’ve got ice in my drink!"