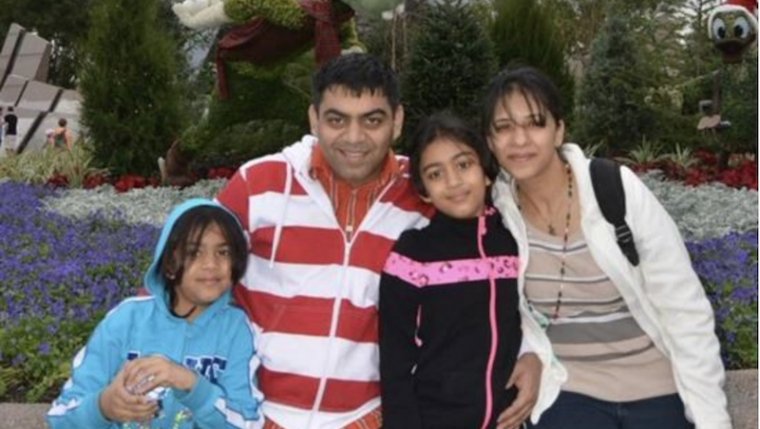 Details are emerging on the 18 Canadian victims of an Ethiopian Airlines plane crash in Addis Ababa that left 157 people dead. Here is what we know so far:

Nine−month−old Rubi was travelling to Kenya with her family to meet her grandfather for the first time.

Her 34−year−old mother, seven year−old brother, four−year−old sister and 60−year−old grandmother were on the flight with her. Rubi was the only Canadian citizen in the family.

Her grandfather, Quindos Karanja, said the family was on its way back to Kenya from Ontario to visit him for Easter.

He said his daughter, Carolyne Karanja, had been excited to go back home but had said she had a "bad feeling" before the trip. He said he’s finding it hard to accept what has happened.

The family of six from Brampton, Ont., was planning to visit Kosha’s birthplace in Kenya, said her brother, Manant Vaidya.

He said his 37−year−old sister hadn’t visited Kenya for decades. Her daughters, 14−year−old Ashka and 13−year−old Anushka, were looking forward to going on a safari, he said.

Manant said his parents were from Gujarat, India, but they lived in Kenya for three or four years. The family later returned to India. Kosha moved to Ontario in 2004 after marrying her husband, who already lived in Canada.

The girls were strong students and enrolled in specialized science and technology courses, Manant said. Ashka was also known for her singing voice, while Anushka was talented in dance and was learning a traditional Indian form called khattak.

Prerit worked as a medical lab assistant for LifeLabs and also held a job at Ontario’s Ministry of Health. Kosha used to work for the Canadian Hearing Society, said Manant.

It was not immediately clear if Pannagesh Vaidya and Hansini Vaidya were Canadian citizens.

Adesanmi was a Nigerian−born professor in the Department of English Language and Literature and the Institute of African Studies at Carleton University in Ottawa.

He was a "towering figure in African and post−colonial scholarship," said the school’s president, Benoit−Antoine Bacon.

Adesanmi was the winner of the inaugural Penguin Prize for African non−fiction writing in 2010.

Mitchell Dick, a Carleton student in communications, said Adesanmi was "extremely nice and approachable," and stood out for his passion for African literature.

Angela Rehhorn, 24, was an enthusiastic conservation volunteer from Orillia, Ont., who was developing a citizen science project on bat conservation.

The Canadian Wildlife Federation says she had recently participated in its Canadian Conservation Corps, a volunteer program for Canadians ages 18 to 30.

She was on her way to participate in the United Nations Environmental Assembly in Nairobi as part of the UN Association of Canada’s Canada Service Corps Program, it said.

Rick Bates, CEO of the Canadian Wildlife Federation, said in an interview that Rehhorn was a well−liked "outdoors girl" who was also a great leader.

"She was full of excitement and the optimism of youth and wanting to change the world and work on changing the world. And that’s what she was doing," Bates said.

Rehhorn recently completed a bachelor of science at Dalhousie University and was "thrilled" to take part in the conservation corps, the federation said.

Her experience took her to Alberta where she went backpacking in Kananaskis this fall, then to Pacific Rim National Park on Vancouver Island for her field training. At the time of her death, Rehhorn had just finished volunteering her time to do species surveys and was especially interested in expanding her experience working in the marine environment, the federation said.

Stephanie Lacroix was passionate about youth education and life skills development in both Canada and southern Africa.

Lacroix was working with the United Nations Association in Canada to help engage young Canadians in the UN’s work to grow global citizens as a project officer with the association’s Canada Service Corps, her LinkedIn profile says.

She graduated in 2015 with an honours degree in International Development and Globalization from the University of Ottawa.

She was a board member of the African Community Fund for Education Canada and previously volunteered with Free the Children.

Her mother Sylvie Lamarche Lacroix of Timmins, Ont., confirmed her death in a Facebook message.

In an interview, Jasveen Brar said she met Lacroix at COP24 in Poland.

"She was a mentor to me and the two other guys that were selected for the conference. Since the COP, we kept in touch over email, where she offered me lots of advice about my career and life, she really was a star," Brar said.

Parvati.org, a not−for−profit conservation group, says the former Edmonton resident was its founding member and director of strategic initiatives.

Belanger’s LinkedIn profile says he was working as a United States director of professional development with PCL Construction in Denver.

Parvati says Belanger had taken time off from PCL and was travelling to Nairobi for the United Nations Environment Assembly.

The organization said he was a champion of the Marine Arctic Peace Sanctuary or MAPS because he realized the importance of the Arctic Ocean in balancing global weather patterns. MAPS declares the entire Arctic Ocean north of the Arctic Circle a protected area, the group said in a statement.

"Admired for his courage, outstanding achievements, and noble qualities, Darcy was a hero in every sense of the word," Parvati said. "He was passionately devoted to the protection of all life through the realization of MAPS."

Messent was an environmentalist from British Columbia who expressed his joy on social media at being able to attend the fourth session of the UN Environment Assembly in Nairobi.

In an Instagram post, he said he had been selected by the United Nations Association of Canada to attend the assembly and was travelling to Kenya where he would "have the chance to meet with other passionate youth and leaders from around the world and explore how we can tackle the biggest challenges that are facing our generation."

"I’m so grateful for this opportunity and want to thank all of the people in my life who have helped me get this far."

Prof. Laurie Meijer Drees taught Messent at Vancouver Island University in Nanaimo and said he was committed to being a role model for Indigenous youth and was regarded as a trailblazer among his classmates and the faculty.

"He was a bright light among all of those bright lights," she said. "He was very enthusiastic, a bright young scholar, very committed to the environment and the land."

Drees said Messent was part of a group of about a dozen Indigenous Studies students who wanted to make the world a better place.

The First Nations Leadership Council said Messent was a member of the Red River Metis Nation in Manitoba and was raised as the youngest of five siblings in the Comox Valley on Vancouver Island. It said he had plans to return to school in the future to pursue a law degree.

Described by a longtime family friend in New Brunswick as a dedicated community activist, deMarsh also travelled the world as chairman of the International Family Forestry Alliance.

The international group, based in Luxembourg, represents more than 25 million forest owners worldwide.

Genevieve MacRae recalled how deMarsh and his wife Jean Burgess helped establish the Taymouth Community Association in central New Brunswick more than a decade ago.

"Peter and his wife Jean made a pretty powerful team," said MacRae, a friend of deMarsh’s since her childhood. "They were always looking for how to improve the lives of the people around them."

MacRae said deMarsh was a pillar of the Taymouth community.

"He was warm, funny, passionate — you always felt listened−to with Peter," MacRae said. "He was an intense person, except that doesn’t signify the warmth that was behind it all ... It’s a monumental loss for our community."

Felix Montecuccoli, a board member with the International Family Forestry Alliance, said in an email that police shared the news of deMarsh’s death with his family late Sunday.

DeMarsh was en route to Nairobi, where he and Montecuccoli had planned to attend a workshop on financing for small farms.

The CEO of the Forest Products Association of Canada, Derek Nighbor, issued a statement describing deMarsh as a life−long advocate for the Canadian forest sector.

"Peter dedicated so much of his life to our sector and was travelling to Africa to do what he loved to do — talking about the environmental benefits of forestry ... He was a true champion of forestry on the global stage."

The 33−year−old Edmonton woman and her five−year−old daughter were travelling to Kenya to visit relatives.

Her brother, Mohamed Hassan Ali of Toronto, said he had planned to travel with them but had to cancel last week.

"(She was) a very nice person, very outgoing, very friendly — had a lot of friends," he said.

A family friend said Odowaa had lived in Edmonton since 2006.

An accountant with the City of Calgary, Lwugi was on his way to Kenya to visit both his and his wife’s parents.

"His mom was not feeling well," Lwugi’s wife, Gladys Kivia, said in a brief interview from Calgary.

The family has lived in Calgary for 12 years.

Hyba’s Facebook page says she was born in Ottawa and pursued a career in international aid work.

She worked for the United Nations High Commissioner for Refugees as an public relations officer, based in Mogadishu, Somalia.

Prior to that, the UNHCR said Hyba worked for CARE Canada.

That agency issued a statement saying she had worked in Indonesia as part of the emergency response to the devastating Indian Ocean tsunami in 2004.

"We remember her fondly as a dedicated humanitarian and loving mother," CARE Canada said on their website.

A 24−year−old marine biology student from Winnipeg, Moore graduated from Dalhousie University in Halifax in 2017.

She posted on Facebook on Saturday morning that she would be travelling to Nairobi for the United Nations Environment Assembly.

"Over the next week, I’ll have the opportunity to discuss global environmental issues, share stories, and connect with other youth and leaders from all over the world," she wrote.

"I feel beyond privileged to be receiving this opportunity."

"She excelled at her studies, she was a kind and friendly person, and she was deeply devoted to environmental and human rights causes," Davies said in an email.

Davies said after graduating from Dalhousie, Moore returned to Manitoba where she worked for several non−governmental organizations, including the Canada Learning Code, a group dedicated to improving the accessibility of educational and technological resources for Canadians.

The professor confirmed Moore’s work was recognized by the United Nations, which is why she was invited to be a delegate to the environmental assembly.