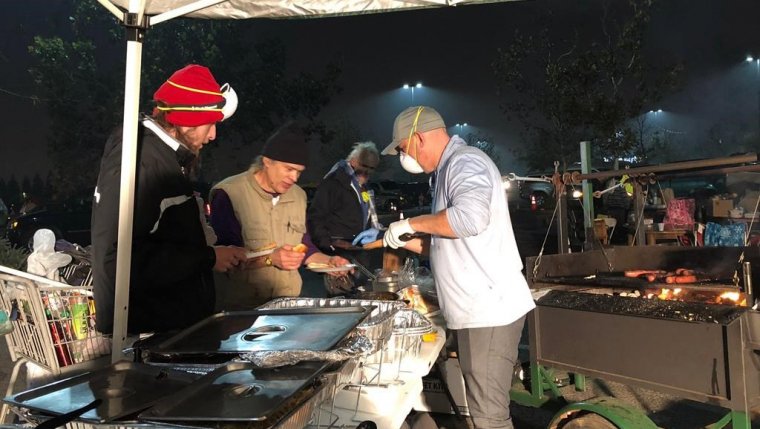 CHICO, CALIFORNIA — A British Columbia couple’s getaway to northern California has turned into a mission to help people fleeing deadly and destructive wildfires.

Destinee and Paul Klyne of Penticton had planned a peaceful holiday in Paradise, Calif., but flames destroyed their Airbnb and much of the community before their arrival. They decided to go ahead with the trip anyway, channelling their vacation funds into relief for exhausted evacuees.

"The funds we had allocated for our fun, we just thought, OK, why can’t we help some people with that? So we went to Walmart and bought a bunch of $25 gift certificates and handed them out to people as we saw fit," said Paul.

The couple set up in the store’s parking lot in Chico, where they joined forces with a food truck operator and worked with him to feed evacuees until he ran out of meals. The next day, someone donated $2,000 to replenish the truck.

Donations kept pouring in and more food vendors offered to help, turning the parking lot into a hub of activity where the couple estimates they served 1,200 to 1,500 people on Thursday. They’ve also been using donated money to buy more gift cards, fill gas tanks and buy groceries.

"It is so nice to be able to bring forth the Canadian spirit of giving, of compassion and generosity," said Destinee. "Especially in the times that we’re in now, with the political (climate), it’s kind of nice to say, ’You are our American neighbours and we love you.’ "

The wildfires are among the deadliest in United States history with more than 600 people reported missing. Paradise has been decimated, with nearly 10,000 homes, hundreds of shops and other buildings going up in smoke.

"We talked to one guy who said he ran back in the fire to try and get his mom," said Destinee. "He couldn’t get his mom and he had to run for his life. His mom and his dog perished in the fire."

Both Destinee and Paul said they remember the names and faces of many of the people they’ve helped.

One man told them he drove his Volvo through a wall of flames because it was either that or die, while another man begged them to make a video and post it to Facebook because he couldn’t find his girlfriend.

"I have had more hugs from strangers than I have had in my entire life," Destinee said.

"We have seen melted cars, like the doors of cars melted off. We saw a Dodge Charger with the lights all melted and back end all melted. ... You see people literally walking around just in a daze."

— By Beth Leighton and Laura Kane in Vancouver