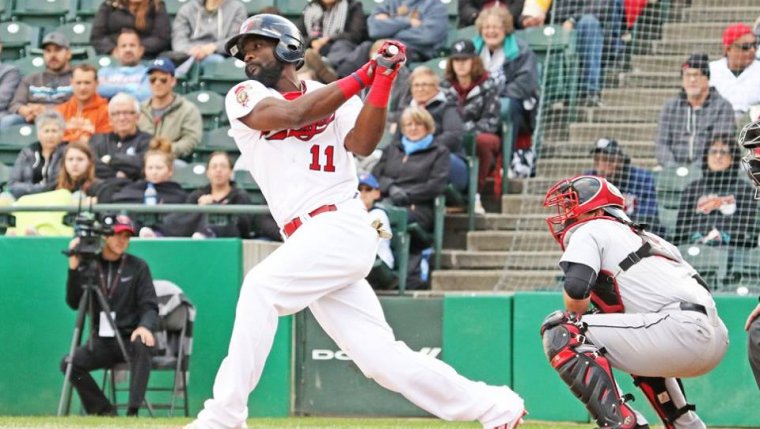 WINNIPEG – The Winnipeg Goldeyes have been hard at work preparing for the 2019 season which begins May 16th on the road against Texas. Tuesday the team re-signed centre fielder Reggie Abercrombie to his sixth season.

Last season, On July 10th versus Sioux Falls, Abercrombie stole the 500th base of his professional career. Having already set the American Association career records for home runs (2016) and RBI (2017), Abercrombie became the league’s all-time leader in base hits on July 29th versus Fargo-Moorhead. Abercrombie’s third-inning single marked his 802nd base hit since first joining the league in 2010, surpassing the previous record held by infielder David Espinosa.

“I’m glad to have Reggie back,” said Goldeyes’ manager Rick Forney. “He is one of the greatest Goldeyes of all-time, and I’m hoping we can capture one more magical moment together before he calls it a career.”

The former Major Leaguer will become just the fourth position player (and fifth player overall) in franchise history to spend six or more years with the Goldeyes. Abercrombie arrived in Winnipeg in 2014, helping the Goldeyes to a North Division title and a club-record 63 regular season wins. Following a brief stint in the Can-Am League, Abercrombie returned to the Goldeyes midway through 2015, and batted .318 with 37 RBI in 47 contests. Abercrombie then played a pivotal role in the Goldeyes’ back-to-back American Association championships in 2016 and 2017.

Abercrombie heads into his 20th overall season of professional baseball, which includes three seasons of Major League experience (2006-08) with the Florida Marlins and Houston Astros. A right-handed batter and fielder, Abercrombie was originally drafted by the Los Angeles Dodgers in the 23rd round in 1999 out of Florida Gateway College (Lake City, Florida). After playing five seasons in the Dodgers’ and Arizona Diamondbacks’ farm systems, Abercrombie spent the entire 2006 season on the Marlins’ Major League roster. Abercrombie is a lifetime .279 hitter with 2,168 base hits, 377 doubles, 294 home runs, 1,170 RBI, and 504 stolen bases in 2,044 games played. The 6-foot-3, 215-pound Abercrombie has achieved 10-plus home runs and 20-plus stolen bases in the same season 14 times in 19 years as a professional.

The Goldeyes also signed right-handed pitcher Dylan Thompson and infielder Kevin Lachance to contracts. Thompson was acquired on October 23rd from the Sioux Falls Canaries in exchange for right-handed pitcher Alex Boshers. Lachance was acquired on November 19th from the Frontier League’s Lake Erie Crushers to complete the April 27th trade in which the Goldeyes sent outfielder Dalton Wheat to Lake Erie in exchange for a player to be named later.

The Goldeyes now have nine players signed to contracts for the 2019 season. American Association clubs may carry up to 28 players during spring training, which begins May 4th.