Winnipeg Goldeyes Come Back Not Enough 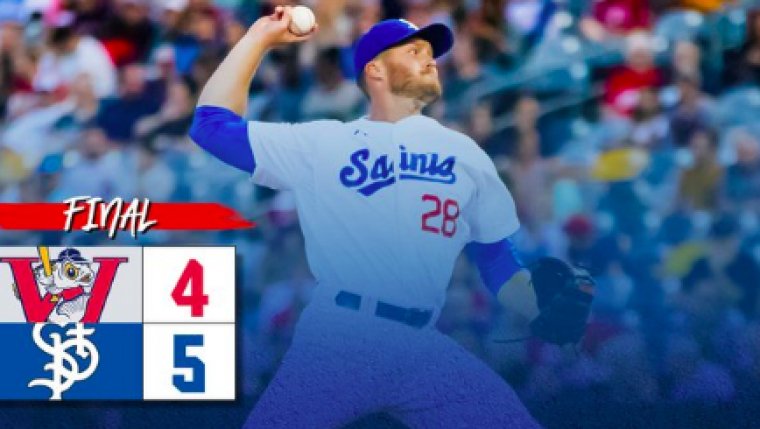 WINNIPEG - Winnipeg 5-4 lose to the St. Paul Saintson Wednesday evening to win the rubber-match of the three-game set against the Goldeyes.

St.Paul got an early lead, but Winnipeg scored four runs in the top of the sixth inning to take a 4-3 lead. It didn't take long for the Saints to move ahead with a pair of their own to go up 5-4, and hold on for the win.

To start the game Goldeyes starter Kevin McGovern walked two of the Saints first three batters, Jabari Henry smacked a single to left field with the bases loaded to score Dan Motl and Michael Lang to put the Saints up 2-0.

McGovern was able to get out of the inning without allowing another run, but things would get worse for Winnipeg in the top of the third inning when Jonathan Moroney, who extended his hitting streak to 12 games with a lead-off single in the first, had to leave the game after suffering a lower-body injury trying to beat out an infield hit.

McGovern settled in after the first inning and pitched scoreless second, third and fourth innings, but in the bottom of the fifth the Saints would extend their lead when Michael Lang ripped a two-out solo shot to left field, upping the St.Paul lead to 3-0.

The Goldeyes were finally able to solve Saints starting pitcher Landon Beck in the top of the sixth inning. In his first start since 2015, Beck held Winnipeg off the board for five innings until a Reggie Abercrombie triple scored Wes Darvill from first, getting the Goldeyes on the board trailing 3-1.

That would do it for Beck who was replaced by Chris Lee. Lee struck out Kyle Martin for the first out but next up was Willy Garcia who smashed a one-out opposite field two-run homer, - his 13th home run of the year - to tie the game at three. It’s the third time Garcia has gone long at CHS Field this season.

Dominic Ficociello was then walked and took second after a single from Adrian Marin. With two men on, Kevin Garcia gave the Goldeyes their first lead of the ball game with a two-out RBI single - his 28th RBI of the year, putting Winnipeg up 4-3.

The celebration was short-lived as the Saints tied things up with their first at bat in the bottom of the sixth, when Jeremy Martinez connected on his 9th home run of the year.

St. Paul was able to get the eventual game-winning run just moments later when Blake Schmit hit an RBI single through the middle of the field to score Chesney Young to give the Saints a lead they’d never relinquish, going up 5-4.