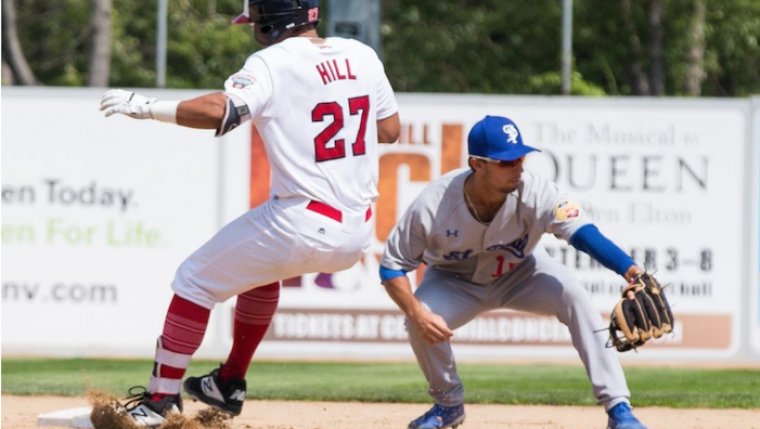 ST. PAUL, MN – The St. Paul Saints won the rubbermatch of their three-game set against the Winnipeg Goldeyes with a 12-1 win at CHS Field Sunday night.

Less than 24 hours after they tied a season-high with 15 runs in a 15-1 win over the Saints, the Goldeyes (29-25) were on the receiving end of a lopsided result.

Goldeyes starter Joel Seddon fell behind early and was never able to recover, giving up a triple to the first hitter he faced in the game Dan Motl. Next up was Brady Shoemaker who collected his 43rd RBI of the season to score Motl with an RBI single to give the Saints an early 1-0 lead. Josh Allen would add to the lead before the inning would run out hammering a two-out, two-run shot to left, and the Saints had a 3-0 lead after one.

The Goldeyes had a chance to cut into the lead In the top of the second, but Reggie Abercrombie’s well struck ball ended up going just a few feet on the wrong side of the foul pole to keep Winnipeg off the board.

The lone run for Winnipeg came in the top of the third inning. After Alex Perez reached with a single, Tyler Hill extended his hitting streak to 15 games with a single that moved Perez to third. James Harris knocked Perez home to cut the lead to 3-1.

From there it was all Saints, who put five more runs on the board in the bottom of the fourth to go up 8-1 and put the game out of reach. St. Paul put up singles in the sixth and seventh innings to get to double-digits, making it 10-1 before adding a pair in the bottom of the eighth to round out the scoring.

St. Paul had five players register two RBI’s in the game while Saints starter Ryan Zimmerman, who was pitching after just three day’s rest, picked up the win, giving up one run on six hits, striking out six in 6.0 innings.

Joel Seddon (2-3) takes the loss for the Goldeyes, giving up eight earned runs on 11 hits, striking out two in 4.0 innings.

After playing every day for the past 20 days, the Goldeyes will get Monday off before returning home on Tuesday, July 16th when they host the Sioux Falls Canaries at Shaw Park. Advance tickets are on sale now by visiting www.goldeyes.com/tickets or by visiting the box office at Shaw Park.