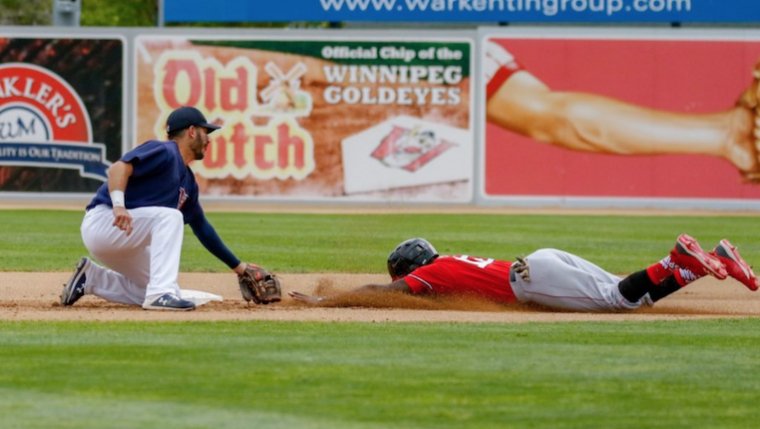 FARGO, ND - The Fargo-Moorhead RedHawks beat Winnipeg 7-1 on Monday night to split the four-game series with the Goldeyes at Newman Outdoor Field.

The Goldeyes (41-31) opened the scoring, and were trailing by just one after four innings, but the RedHawks (46-27) took control of the game in the fifth, hitting three home runs and scoring four times, and the Goldeyes couldn’t recover.

The Goldeyes scored their only run of the game just three batters into the contest. After Carlos Garcia split the gap to right-center to earn a stand-up triple, James Harris picked up his 38th RBI of the season, bringing home Garcia with an RBI groundout to put Winnipeg up 1-0.

The lead would last until the bottom of the third when Correlle Prime smacked the first of five home runs on the night for Fargo, a two-out, two-run homer off of Goldeyes starter Joel Seddon to give Fargo their first lead of the game at 2-1.

After a scoreless fourth, things would begin to unravel for Seddon and the Goldeyes in the bottom of the fifth as the RedHawks went long three times, bringing home four runs in the inning to take a commanding 6-1 lead. Tim Colwell ripped a solo shot over the left field fence to put Fargo up 3-1 before Chris Jacobs launched an opposite field two-run homerun just two batters later. T.J Bennett would round out the scoring in the inning, hammering a shot more than 400 feet from home plate to deep centerfield to give the RedHawks a 6-1 lead.

Seddon was replaced by Mitch Aker in the bottom of the sixth after giving up six earned runs on 10 hits, four strikeouts in 5.0 innings pitched.

The Redhawks would add their fifth home run of the ball game in bottom of the eighth inning when Daniel Comstock went long to round out the scoring.

RedHawks starter Tyler Pike picked up the win, giving up one earned run and striking out six in 7.0 innings pitched.

The Goldeyes return home Tuesday night when they welcome the Lincoln Saltdogs to Shaw Park for a quick three-game set before hitting the road once again. Advance tickets are on sale now by visiting www.goldeyes.com/tickets or by visiting the box office at Shaw Park.