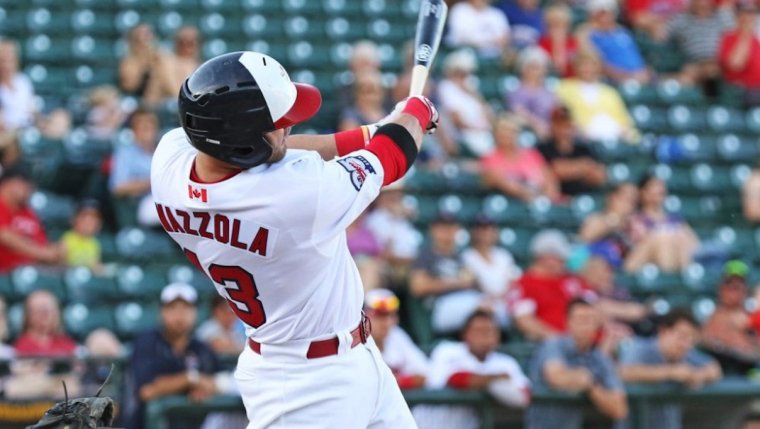 A productive third inning for the T-Bones led the team to their eventual win. T-Bones outfielder Keith Curcio began the inning with a leadoff single. Two outs later, Nick Torres hit a tough infield ball that got him safe at the plate, despite a tremendous throwing effort to first by Goldeyes starting pitcher Kevin McGovern. With runners on both corners, Zach Walters hit a two-out, two-run homer to break open the game, and give the T-Bones a 4-1 lead.

Scoring opened in the second, when T-Bones Tucker Pennell grounded ball along the left line to bring Walters home.

Reggie Abercrombie tied the game soon after, with a single homerun to left centrefield. The homerun was Abercrombie’s 66th as a Goldeye. He now passes two-time Goldeyes MVP Terry Lee for second place in franchise career homeruns, only standing behind Josh Mazzola in first.

In the sixth inning, Matt McCann singled on his seventh pitch from T-Bones starter Lucas Irvine. Next, Tucker Nathans drew a four pitch walk. Dave Sappelt followed up with a 2 RBI double, bringing the tying run to the plate. Despite an infield single from Abercrombie that put runners on both corners, the Fish weren't able to score again.

The T-Bones increased their lead in the seventh. Curcio walked after being hit by pitch, and scored on a double from Dylan Tice. After Todd Cunningham sacrificed Tice to third, the final run of the game was scored by Tice, on a double from Nick Torres.

McGovern took the loss for the Fish, allowing six runs (six earned) over six and a third innings. Goldeyes pitchers Jack Charleston, Cameron McVey and Josh Blanco all worked their way through scoreless innings in relief.

Irvine picked up the win for the T-Bones, allowing three runs (three earned) over six innings. Francisco Gracesqui and Hunter Adkins pitched scoreless innings in relief, while Carlos Diaz picked up the save.

The Goldeyes now hit the road to play a four game series against the Saint Paul Saints in their first matchup of the season. Goldeyes Alex Boshers (1-3, 3.68) takes the mound on Thursday night at 7:05 p.m. and faces former Major League righthander Scott Esch.