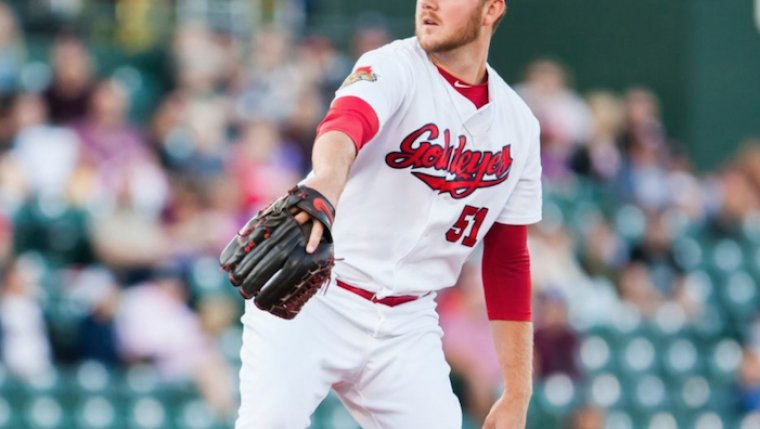 The Goldeyes have won six games in a row.

Tied at 1-1 in the bottom of the seventh, the Goldeyes scored four runs with two outs to take the lead. Kevin Garcia opened the inning with a single to right-centre. Three batters later, Reggie Abercrombie kept the inning alive with a double down the left field line. With second and third and two outs, Kyle Martin lined a sharp single up the middle that scored both runners. After Joel Seddon relieved Canaries’ starter Sam Bragg, Willy Garcia hit a two-run home run to left-centre.

“Great game, I thought the guys looked good tonight,” said Goldeyes’ manager Rick Forney. “We got some big, timely hits. Martin drove in some runs. Willy got the big home run late. Pitching was good. Joel was really good today, and the bullpen did a good job adjusting.”

The Canaries (37-60) answered back with three runs in the top of the eighth. Michael Hart led off with a home run to right-centre, and the Canaries pulled within 5-4 on back-to-back RBI groundouts from Brett Vertigan and Alay Lago. Cameron McVey struck out Andrew Ely as the tying run at the plate to end the inning.

In the top of the ninth, Victor Capellan struck out the side in order to record his 27th save.

Tyler Garkow (4-0) picked up the win in relief for Winnipeg after pitching a scoreless top of the seventh.

Bragg (4-6) took the loss, allowing four earned runs on 13 hits in six and two-thirds innings. Bragg walked none and struck out six.

Winnipeg took a 1-0 lead in the bottom of the first when Martin singled home Wes Darvill with two outs.

Hart tied the score in the top of the second with a two-out double.

Game two of the four-game series is Saturday evening. First pitch from Shaw Park is at 6:05 p.m. Kevin Hilton (5-10, 4.54) faces right-hander Tyler Herron (1-2, 3.86). Advance tickets are on sale now by visiting www.goldeyes.com/ticketsor by visiting the box office at Shaw Park.