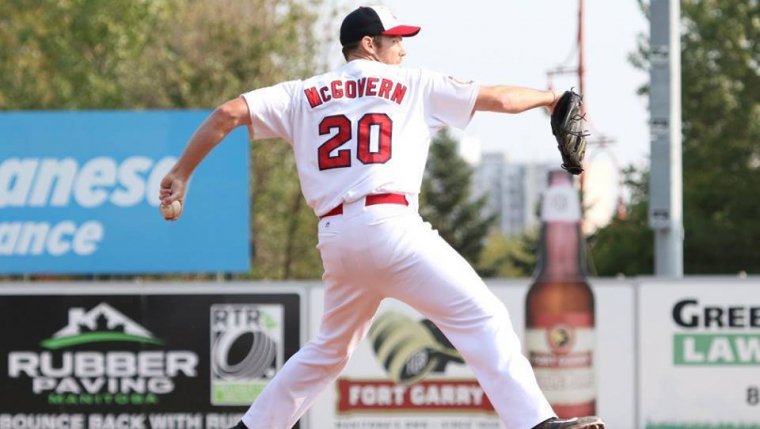 WINNIPEG - The Winnipeg Goldeyes fell behind early, but a four-run third inning helped guide the Fish to their first victory of the 2018 season with a 4-3 win over the Cleburne Railroaders.

Pitcher Edwin Carl started his first game of the season for Winnipeg, and tied a career-high with 11 strikeouts over six innings, passing Shawn Onley for fourth on the Goldeyes’ career strikeouts list in the process.

After falling behind 1-0 in the second inning off of a Levi Scott homerun, Winnipeg took advantage of a nightmare inning for Railroaders pitcher Will Mathis to regain the lead.

Mathis walked four consecutive players and threw two wild pitches in the top of the third, before ultimately getting the hook, but the damage was done.

Kevin Garcia drew the first walk of the inning off of Mathis, followed by Matt McCann. On a wild pitch, the players advanced to third and second, respectively. Andrew Sohn was walked next. With the bases loaded and Victor Cruzado at bat, Garcia took advantage of another wild pitch and made it to home plate. After Cruzado was walked, Mathis was replaced by Michael Gunn. Three batters later, with Rodriguez on third, Josh Mazzola made a sacrifice high fly ball deep centerfield, to bring Rodriguez home and give the Fish the 4-1 lead.

Cleburne made it close, scoring a pair of runs in the bottom of the fourth when Patrick Palmiero hit a high fly ball that bounced off the centerfield wall, allowing KC Huth to score. Levi scored the third run for the Railroaders on a sacrifice fly from Cameron Monger, but that’s as close as the Railroaders would get and Winnipeg would break the goose egg and pick up their first win of the season.

Cameron McVey and Jack Charleston both played strong relief innings for the Goldeyes, allowing no runs to be scored, while Goldeyes relief pitcher Victor Capellan picked up his first save of the season in the win.

The Goldeyes are back in action Monday night when they begin a three-game set in Texas against the Airhogs.