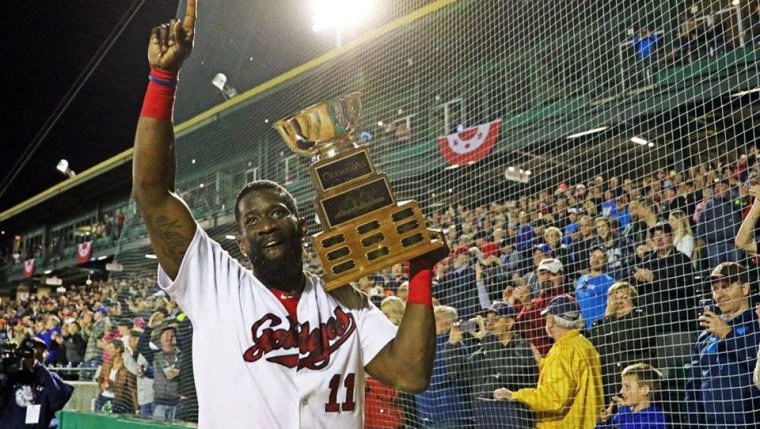 WINNIPEG, MB - With spring training just a few weeks away, the Winnipeg Goldeyes continue to solidify their lineup for the 2018 season.

Outfielder Ty Moore and infielder Matt McCann are the newest members to sign on with the club.

Originally drafted by the Pittsburgh Pirates in the 12th round in 2015 out of the University of California, Los Angeles (UCLA), the 6-foot, 190 pound Moore brings another left-handed bat to the plate for the Goldeyes. Offensively, the 24-year-old showed his consistency at the plate, compiling a 15-game hitting streak (20-for-59, .339) while playing for Bradenton. Defensively, Moore has committed just five errors in 257 professional games, and helped the Short Season-A West Virginia Black Bears to a New York-Penn League championship in 2015.

“Ty is coming off a fantastic season in the Pirates’ organization,” said Goldeyes’ manager Rick Forney. "I'm hoping he can pick up where he left off. Matt is a versatile defender with a real knack for getting on base. He should be a valuable rookie on our club."

McCann was drafted in the 25th round by the Los Angeles Angels in 2017 and was a true rookie last season, hitting a combined .246 with a .373 on-base percentage in his first professional season.

The 23-year-old played for four Angels' affiliates last season, including a stint with the Double-A Southern League's Mobile BayBears. In 54 total games, McCann scored 32 runs with five doubles, one home run, 14 RBI, six stolen bases, and walked nearly as many times (32) as he struck out (40). Defensively, the 23-year-old McCann posted impressive fielding percentages at both shortstop (.986, 20 games) and second base (.971, 30 games), and helped turn 28 double plays between the two positions.

A right-handed hitter and fielder, McCann is also a base-running threat. The Princeton, New Jersey native attended Fairleigh Dickinson University (Teaneck, New Jersey), departing the program as the Knight's all-time leader in stolen bases (78 in 186 collegiate games) and has been clocked as fast as 6.35 seconds in the 60-yard dash, which is considered an "80 grade" on the 20-80 scouting scale.

The Goldeyes now have 23 players under contract for the 2018 season. American Association clubs may carry up to 28 players during spring training, which begins May 6th.