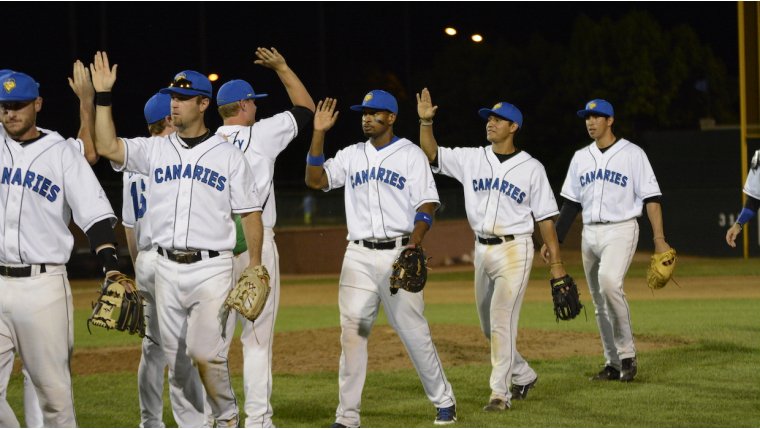 SIOUX FALLS – The Goldeyes lost a close one, 10-8 to the Sioux Falls Canaries on Thursday night.

A solo homerun from Josh McAdams in the bottom of the ninth brought the Fish within two, but it wasn’t enough to give them the series win over the Canaries. McAdams’ homerun was his first in a Goldeyes uniform.

The Canaries charged out to an early lead, scoring three two-out runs in the bottom of the first. After Goldeyes starting pitcher JC Sulbaran retired the first two batters, Chris Grayson doubled to keep the inning alive. David Bergin scored Grayson with an RBI single to left. Jabari Henry followed up with a bloop double to centrefield, advancing Bergin to third. With Jordan Dean batting, a throwing error by Matt McCann resulted in both Bergin and Henry scoring.

The Birds increased their lead to 4-0 in the bottom of the second, when Dan Motl scored from third on a wild pitch.

In the third, the Goldeyes came storming back. Canaries starting pitcher Tyler Wolfe issued a five-pitch, leadoff walk to Josh Mazzola. Tyler Baker singled through right, advancing Mazzola to third. Jordan Ebert drew a five-pitch walk to load the bases. McCann doubled to score both Mazzola and Baker. A good read on a wild pitch to Tucker Nathans allowed Ebert to slide headfirst into home. Nathans worked his way to a full count, and sacrificed McCann home to tie the game at 4-4. Down two in the count, Josh Romanski hit a single to put another man on base. After Reggie Abercrombie was hit by a pitch, McAdams doubled to score Romanski and Abercrombie and give the Fish a 6-4 lead.

The Fish increased their lead in the fourth. Ebert hit an opposite field single and stole to second. Romanski hit a sharp grounder that snuck past the glove of Bergin, and allowed Ebert to score. In the bottom frame, Patrick Fiala cut the Canaries’ deficit to 7-5 with a leadoff solo homerun.

In the bottom of the sixth, a two-run homerun from Maxx Garrett helped the Canaries come from behind and tie the game at 7-7. The Birds pulled into the permanent lead four batters later, when Henry struck a two-out, two-run homerun to give his team a 9-7 lead.

The Canaries tacked on a final run in the seventh, after Jordan Smith reached home on a Goldeyes throwing error.

Jack Charleston took the loss in relief for the Goldeyes, allowing two runs (zero earned) on one hit. Five of the ten runs for Canaries in the game were unearned. Kyle Schepel pitched three scoreless innings in relief and recorded the win for the Canaries. Nicco Blank picked up his first save of the season.

The Fish now head to Fargo to play a three-game series against the Fargo Moorhead RedHawks beginning Tuesday. Lefthander Kevin McGovern (3-6, 3.94) will be the starting pitcher for the Goldeyes. Fargo has not yet announced their starting pitcher.

The Goldeyes return home on Tuesday, July 24th when they host the Texas AirHogs at Shaw Park. Tickets for all Goldeyes’ home games are on sale now by visiting www.ticketmaster.ca/Goldeyes, or visiting any Ticketmaster location, including the box office at Shaw Park.