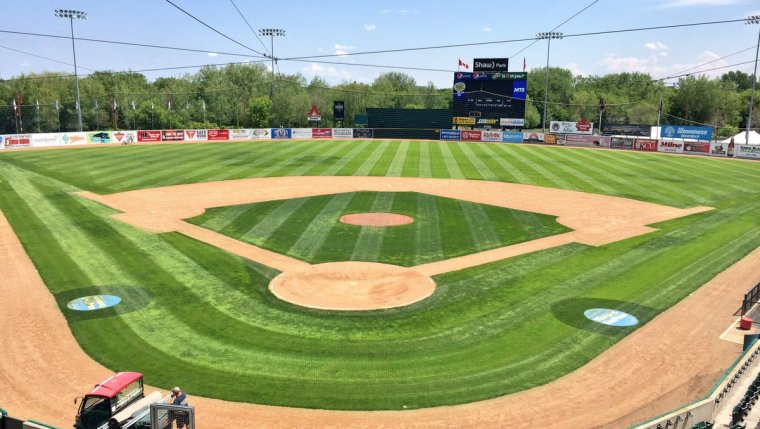 CLEBURNE, TX – The Winnipeg Goldeyes (5-2) wrapped up their seven-game season-opening road trip with an 8-4 loss to the Cleburne Railroaders on Wednesday afternoon at the Depot at Cleburne Station.

A five-run bottom of the fourth for Cleburne proved to be too much to overcome for Winnipeg as the Railroaders avoided the series sweep and handed the Goldeyes just their second loss in their first seven games to open up the season.

Coming off what Rick Forney called “probably their best effort of the season” in a Tuesday night 7-3 win over Cleburne, the Goldeyes fell behind 1-0 in the bottom of the second before allowing five more runs in the bottom of the fourth. They were able to cut the lead to 6-4, but that’s as close as they would come on the afternoon as Cleburne (4-3) held for their fourth win of the season.

Winnipeg starter Mitch Lambson falls to 1-1 on the season after allowing six runs on 11 hits in 5.0 innings Wednesday afternoon.

In the bottom of the second, Railroaders Audie Afenir, who signed with the Railroaders on Tuesday, gave the Goldeyes trouble all day long, connected on his first homerun of the season, booming a shot off the scoreboard in left-center field to put Cleburne up 1-0.

Things stayed that way until the bottom of the fourth. The Railroaders loaded the bases with nobody out for Kenny Meimerstorf who hit a two-run double scoring Afenir and Jared Reaves to put the Railroaders up 3-0. Just two batters later, Nick Rotola knocked a two-run single of his own, bringing home a pair to put Cleburne up 5-0 with still only one man down. After Rotola stole second, Zach Nehrir rounded out the scoring, hitting an RBI triple to score Rotola and giving Cleburne a commanding 6-0 lead.

Winnipeg’s offence finally began to find its way in the top of the sixth, and were able to claw their way back after getting to Cleburne’s 23-year-old starter Eudis Idrogo. After Wes Darvill walked, then stole second to begin the inning, James Harris ripped an RBI single to bring Darvill home and cut the lead to 6-1. Alex Perez was up next and fell behind 0-and-2 in the count before sending a single through the gap that sent Harris to third. Adrian Marin would be the fourth straight Goldeyes to get on base in the inning, dropping a line drive single to left that allowed Harris to come in from third and the Goldeyes now trailed 6-2. Jeremy Smith took over for Idrogo, who finished with exactly 100 pitches in the game, and the first batter Smith faced was Kevin Lachance, who welcomed Smith to the game by smashing a two-run triple to right field to score both Perez and Marin, and all of a sudden Winnipeg cut a six-run deficit down to two at 6-4. Smith then walked both Josh Romanski and Willy Garcia to load the bases for Abercrombie with only one down before being replaced by Edward Cruz. Cruz struck out Abercrombie, then faced Darvill, who began the inning with a walk for Winnipeg, and struck him out as well, to end the threat.

Jack Charleston took over for Lambson in the bottom half of the sixth, and the Railroaders answered with a pair of runs. With runners on first and second, Afenir continued his hot play, picking up his fourth hit and second RBI of the ball game, driving home Chase Simpson with a single to make it 7-4. Afenir would finish the day with five hits. Up next was Jared Reaves, having a great afternoon of his own, who ripped his third hit of the game to bring home Angel Rosa, putting the Railroaders up 8-4, a lead they’d never relinquish.

The Goldeyes end their season-opening road trip with a 5-2 record, and after 13 days away from Winnipeg, the Goldeyes will make the 2,200 km trek back to Winnipeg and get set to open up the home-portion of their schedule on Friday night with a three-game set against the defending American Association champions, the Kansas City T-Bones at Shaw Park. All the action can be heard locally on 93.7 FM CJNU and worldwide at www.cjnu.ca