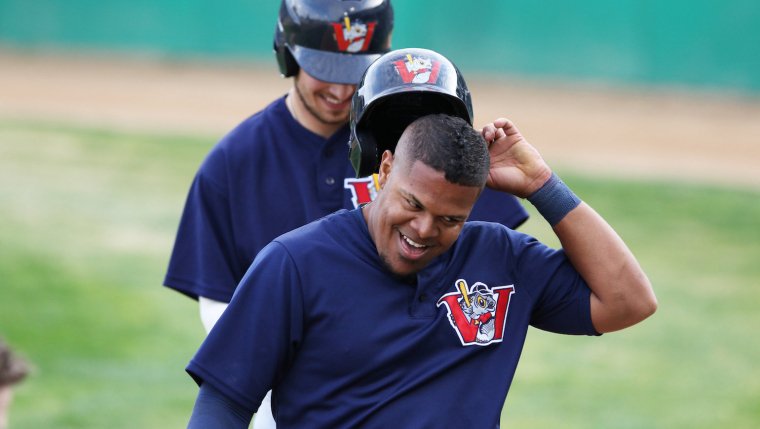 All nine of Winnipeg’s starters would reach the bases and pick up an RBI on the night. The Goldeyes pounded 18 hits in addition to the 16 runs, which were both season-highs.

Romanski, who is back for his third season with the club after helping them win American Association championships in 2016 and 2017, picked up where he left off, rocking a two-out bomb over the fence in his first at bat, putting the Goldeyes on the board 1-0.

That opened the flood gates and in the second inning Winnipeg would put up a snowman, adding eight more runs as 13 batters came up to the plate in the inning.

Dave Sappelt had one of his best games in a Goldeyes sweater, leading off the top of the third with a home run to left and finished the game with four base hits and four runs scored.

St. Paul tried to claw their way back into the game, adding a pair in the fourth inning and another three in the eighth to trail 11-5, but a five-run top of the ninth from Winnipeg would end any chances of a comeback as the fish opened up a four-game series against the Saints with a 16-5 win.

“We have some guys who’ve been struggling, so it was a good night to try and get well, in a sense,” said Vaeth. “We didn’t want to give any at bats away, no matter what the score was. We wanted to keep swinging, be locked in mentally at the plate tonight, and try to get some guys healthy (at the plate).”

The Goldeyes return home on Monday to begin a seven-game homestand when they host the Wichita Wingnuts at Shaw Park.

Over the last two seasons, Romanski has hit .379 in 95 at bats with two outs and runners in scoring position.

During his MVP campaign in 2017, Romanski batted .324 with 74 runs scored, 27 doubles, 11 home runs, 81 RBI, 10 stolen bases, and 46 walks. A left-handed hitter and fielder, Romanski ranked fourth in the American Association in batting average, tied for fifth in runs, and tied for third in RBI. On three separate occasions last year, Romanski strung together a career-high 13-game hitting streak (May 27th-June 11th, June 18th-July 1st, and July 5th-July 18th). On July 25th , Romanski was 2-for-4 with a double in the American Association/Can-Am League All-Star Game at Ottawa. Romanski was also selected to participate in the home run derby before the event was canceled due to rain.

Romanski is a lifetime .360 hitter at Shaw Park with eight home runs and 81 RBI in 102 games played. Last year, Romanski hit .286 against left-handed pitching, and hit .356 against lefties in 2016, which was the highest mark in the American Association that season among left-handed batters. The 31-year-old outfielder has 49 RBI in 81 combined career games against the Fargo-Moorhead RedHawks and the St. Paul Saints.

Romanski is in his 10th season of professional baseball, and was originally drafted by the Milwaukee Brewers in the fourth round in 2008 out of the University of San Diego (San Diego, California). The 6-foot, 185-pound Romanski was an All-American for the Toreros as a two-way player. Romanski hit .318 with 13 home runs and 99 RBI in 606 collegiate at bats, while going 23-6 on the mound with five saves and a 3.63 ERA in 264.2 innings.

Romanski pitched professionally for four seasons, reaching Triple-A in 2013, and combining for a 19-15 record with a 3.63 ERA in 275.1 frames. Romanski converted into a full-time position player in 2014 with the Gary SouthShore RailCats where he hit .311 with seven home runs and 60 RBI in 96 contests. Romanski played in the Japanese Industrial League in 2015 before signing with the Goldeyes the following year. Earlier this season, Romanski played in 27 games for the Mexican League’s Pericos de Puebla.

The Goldeyes open a four-game series at St. Paul tonight. First pitch from CHS Field is at 7:05 p.m. All the action can be heard locally on 93.7 FM CJNU and worldwide at www.cjnu.ca

The Goldeyes return home Monday when they host the Wichita Wingnuts. Tickets for all Goldeyes’ home games are on sale now by visiting www.ticketmaster.ca/Goldeyes, or visiting any Ticketmaster location, including the box office at Shaw Park.