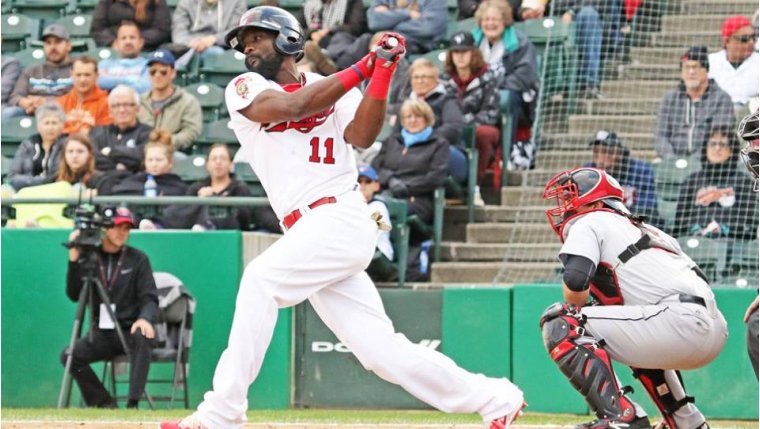 WINNIPEG - It’s safe to say the Sioux Falls Canaries are not too happy with the welcome the Winnipeg Goldeyes gave them Friday night for the team’s home-opener at Shaw Park.

To the delight of the close to 6,500 fans in attendance, the Goldeyes scored seven runs in the second inning, added another six before the night was done, and picked up their fifth consecutive win as they dismantled the Canaries 13-1.

The Goldeyes were honoured before the game with the raising of the championship banner, and they looked in championship form all night long.

Winnipeg struck early and often in this one. With two aboard and one out in the second inning, Jordan Ebert hit a single which scored Victor Cruzado to bring the crowd to its feet, and give Winnipeg a 1-0 lead.

The floodgates would open for Winnipeg as the next four batters who came to the plate would pick up singles, with each driving home a run in the process. When all was said and done, the Fish had put up a converted touchdown after two innings to lead 7-0.

The Canaries would get their one run in the third inning, but from there it was all Winnipeg, who scored three runs in both the bottom of the fourth and fifth innings to give them the victory.

Reynaldo Rodriguez went 4-for-5 at the plate and has been impressive early on this season, picking up a hit in six of the Goldeyes seven games.

Kevin McGovern picked up his first win of the season in a near perfect performance Friday night. In his first trip to the mound as a 29-year-old (McGovern turned 29 May 22), the left-handed hurler gave up just one run on four hits in eight innings.

The two clubs are back at it Saturday night in game two of their three-game set. Edwin Carl is set to take the mound for Winnipeg with first pitch scheduled just after 6:00 at Shaw Park.